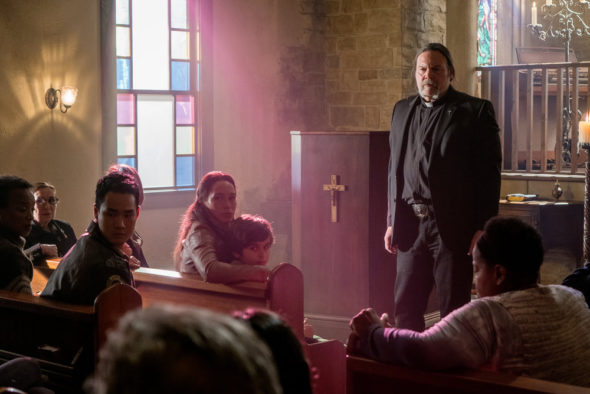 Does Port Moore, Alaska have a ghost of a chance? Has the Ghost Wars TV show been cancelled or renewed for a second season on Syfy? The television vulture is watching all the latest cancellation and renewal news, so this page is the place to track the status of Ghost Wars season two. Bookmark it, or subscribe for the latest updates. Remember, the television vulture is watching your shows. Are you?

The first season of Ghost Wars averaged a 0.09 rating in the 18-49 demographic and 376,000 viewers. Find out how Ghost Wars stacks up against the other Syfy TV shows.

Will Syfy cancel or renew Ghost Wars for a second season? The series is one of the channel’s lowest-rated scripted series. Sometimes Syfy gives shows a chance to grow, while other times, it is ruthless. My gut feeling is that this show will be cancelled. I’ll keep an eye on the Nielsens and update this page as more data becomes available. Subscribe for free updates on any Ghost Wars cancellation or renewal news.

What do you think? Were you hoping that Syfy would renew its Ghost Wars TV show for a second season? Are you sorry that they cancelled this TV series, instead?

I’ve only just watched this show, i’m up to episode 11and was HOPING FOR A NEW SEASON….. GUESS I’ll face to wait and hope like the rest of these new fans…. come on syfy…. let a legend begin….

PPPPPLLLLLLEEEEEEEAAAAAASSSSSSEEEE bring it back and market it for success! This show could really take off at the right time slot and with the ad verbiage to help people understand what it’s truly about instead of what the poor choice of words in naming the show implies.

Renew Plz this show is great

Hope we get season 2

This tv series is not for every one it’s hard to understand if you are not fascinated by ghosts
This is my favourite TV Series out of all cause it got my mind blown, made me sad in some situations, (no spoilers) happy and a lot of other emotions that make think to a lot.
Anyway i hope the series goes on because i would love to be blown away again.
P.S. I’ve watched 13 episodes in one day and that means it’s a really good show because i don’t do that unless i like it very much

TERRIBLE thing they did when this show was named! They dug their own grave. What were they thinking? You can’t make a drama/horror series and then name it something that sounds like reality TV. People won’t even give it a second look because they are thinking, “Reality show? YUCK!”