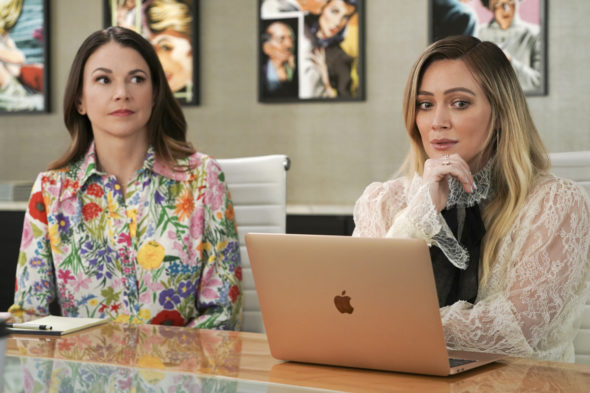 TV Land is saying goodbye to the Younger TV series after seven seasons. The cable channel has announced that the final episodes will begin airing on Wednesday, July 7th and two installments will air each week. Season seven just finished being released on the Paramount+ streaming service last week.

A romantic comedy, Younger stars Sutton Foster, Debi Mazar, Nico Tortorella, Hilary Duff, Molly Bernard, Peter Hermann, with Miriam Shor, Charles Michael Davis, Laura Benanti, and Janeane Garofalo recurring. The story centers on single mother Liza Miller (Foster) who passes herself off as a twenty-something, to land a job in the publishing industry. As Liza’s personal and professional lives mesh, keeping her secret becomes more difficult. In season seven, Liza’s personal life is on shaky ground as she tries to stay true to herself. After a setback at work, Kelsey (Duff) doubts her career decisions and discovers a new creative outlet. Meanwhile, Maggie (Mazar) gets cancelled.

Younger follows Liza Miller (Sutton Foster), a talented editor navigating the highly competitive world of publishing while juggling the complications of mixing business with pleasure, and facing the lie she created about her age to land her dream job. In the final season, Liza’s personal life is on shaky ground as she tries to stay true to herself. After a setback at work, Kelsey (Hilary Duff) doubts her career decisions and discovers a new creative outlet. Maggie (Debi Mazar) gets cancelled.

Check out our status sheets to track new TV series pickups, renewals, and cancellations. You can find lists of cancelled shows here.
What do you think? Have you enjoyed watching the Younger TV series? Will you be watching the final episodes on TV Land or, have you already seen them?

Absolutely love the show! I would love to see it extended. It is such a feel good show with great characters and great friendships.

The show was one of my favorites! I am so so sad to see it go. It always made me laugh. You need a good feel good show. This show will be missed greatly.

I would have watched until Liza hit retirement! Sutton Foster is one of my favorite people. Have heard the final season doesn’t hit the usual mark of excellence but am still looking forward to it hitting my TV. Bon voyage ladies & the hottest tattoo artist around in Nico T.