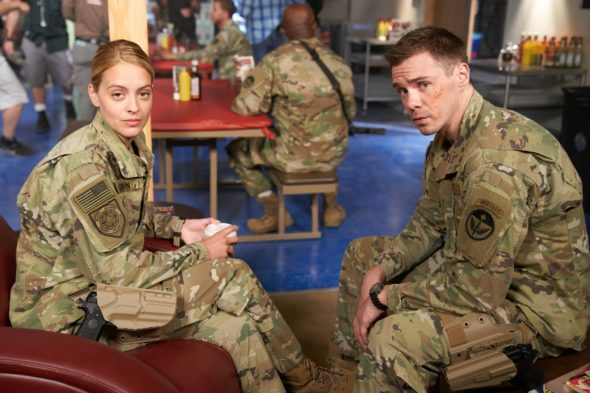 Is this series the new M*A*S*H? Has the 68 Whiskey TV show been cancelled or renewed for a second season on Paramount Network? The television vulture is watching all the latest cancellation and renewal news, so this page is the place to track the status of 68 Whiskey, season two. Bookmark it, or subscribe for the latest updates. Remember, the television vulture is watching your shows. Are you?

Airing on the Paramount Network cable channel, 68 Whiskey stars Sam Keeley, Jeremy Tardy, Gage Golightly, Cristina Rodlo, Beth Riesgraf, Lamont Thompson, Nicholas Coombe, and Derek Theler, with Usman Ally, Lamont Thompson, Artur Benson, and Aaron Glenane in recurring roles. The show follows a multicultural band of Army medics stationed in Afghanistan on a base nicknamed “The Orphanage.” Together, the medics navigate a dangerous and sometimes absurd world, relying on comradery, various vices, and, occasionally, a profound sense of purpose to carry them through.

The first season of 68 Whiskey averaged a 0.10 rating in the 18-49 demographic and 499,000 viewers. Find out how 68 Whiskey stacks up against other Paramount Network TV shows.

Will Paramount Network cancel or renew 68 Whiskey for season two? This is only the channel’s second original scripted series so, I thought that the show was almost sure to be renewed. However, the continuous drop in ratings makes me think that it will be cancelled instead. I’ll update this page with breaking developments. Subscribe for free alerts on 68 Whiskey cancellation or renewal news.

9/3/20 update: 68 Whiskey has been cancelled by Paramount Network so, there won’t be a second season.

What do you think? Were you hoping that the 68 Whiskey TV show would be renewed for a second season? Are you sorry that Paramount Network cancelled this TV series, instead?

It never fails that the good shows get canceled. We can have a tattoo show for 15 seasons but not something like this….stupid. Bring it bak!

I was hoping to see more. I really got into the show . I hope to maybe see more if not on Paramont on some

I just want to say it really sucks that they canceled 68 whiskey I really liked that show.

They cancel the best shows!!!!

Very sad to hear it has been canceled!!!! Makes me not want to start any shows again on here. Not even an ending!!!! How disappointing is that!!! Had it recorded and just binged on it. Sorry I didn’t look at reviews before I got involved!!!!

Was really looking forward to season / of 68 whiskey , can’t believe you find it necessary to cancel the show . So disappointed .

We were anxiously waiting for 68 Whiskey to return. Very disappointed.

The coarse language is absolutely terrible BUT while using a MASH like format, the multiple story lines and interactions are fascinating. The writers are truly gifted coming up with story lines.
I am really going to miss this and I had just found it. I am sure that if the dialogue had the profanity removed and risque scenes tamed viewership would increase expotentially.
Sad in Texas.

I loved this show i was so surprised to hear they cancelled it. Very disappointed. Hope they reconsider this.

Makes you want to stop watching paramount channel, you get invested then oh its not coming back, not even long enough to give the show some kind of ending

I loved 68 whisky! It angers and disappoints my family that it has been cancelled. We hope they reconsidet

Loved this show just getting totally into the characters, and now it’s cancelled, extremely disappointed