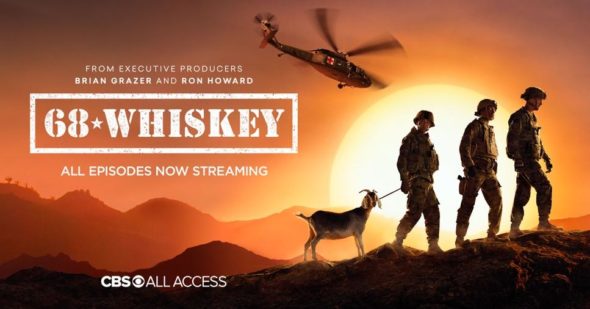 68 Whiskey has landed on CBS All Access. Season one of the series is now available for streaming on the service. The series aired on Paramount earlier this year.

CBS All Access revealed the following about 68 Whiskey coming to the service in a press release:

“CBS’ subscription video on demand and live streaming service, today announced the addition of Paramount Network 68 WHISKEY, introducing the CBS All Access audience to additional content from within the ViacomCBS family. All 10 episodes of the hour-long comedic drama are now available to stream on the service, giving subscribers the perfect summer binge.

When 68 WHISKEY premiered on Jan. 15 on the Paramount Network, it broke a new record as the most-watched cable drama series premiere in over a year (Nielsen live plus 3-day ratings, since November 2018).

What do you think? Will you watch this series on CBS All Access?

Now that the Paramount Network has abandoned the show, any chance that CBS All Access could continue the show into a second season itself. CBS/Paramount/Viacom is all the same company, of course. So the corporate red tape shouldn’t be too difficult to work out if they want to move forward.

Looking forward with much interest to more 68 whiskey episodes

I personally did not need to see all the SEX ! Leave that out and you have a rather good show

I hope it’s not just a knockoff of the British show, Bluestone 42.

I don’t not I have to see it first

This is why i cancelled my membership..crap shows and no added older content..ripoff service.