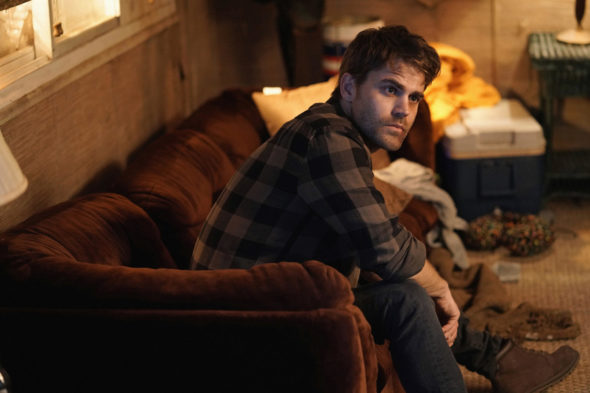 Paul Wesley is coming back to CBS All Access. The streaming service just announced the Vampire Diaries star has joined season two of Tell Me a Story.

CBS All Access has not yet announced a premiere date for season two of Tell Me a Story, but you can read more info below:

Created by Kevin Williamson, TELL ME A STORY takes the world’s most beloved fairy tales and reimagines them as a dark and twisted psychological thriller. Exploring a whole new set of fairy tales and characters each season, season two of the series will feature the tales of three legendary princesses – “Beauty and the Beast,” “Sleeping Beauty” and “Cinderella” – like you’ve never seen them before.

Paul Wesley will star as Tucker. A struggling novelist, Tucker spends his sleepless nights toiling away in a secluded cabin in the woods and his days trying to prove he’s good enough for his beautiful fiancée. But it’s all about to come crashing down as a dark secret threatens to destroy his world.

Paul Wesley’s recent acting credits include a co-starring role in the first season of TELL ME A STORY, produced by Kapital Entertainment where Wesley’s production company, Citizen Media, has an overall deal. Over the last few years, Citizen Media has set up multiple series projects for development at various networks and studios including ABC, Fox 21 TV Studios, Warner Bros TV/Warner Horizon and Freeform. Currently in development is “Confessions of a Drug Addicted High School Teacher,” starring Wesley and directed by David Slade (“Black Mirror: Bandersnatch”), also produced by Kapital and Citizen Media. Wesley starred on “The Vampire Diaries” for eight seasons, directed multiple episodes throughout the series’ run, and served as a producer for its final season. Behind the camera, last year he directed episodes of “Roswell, New Mexico” and “Legacies.” In addition, he had a co-starring role in Netflix’s docu-drama “Medal Of Honor,” produced by Robert Zemeckis, and starred in two off-Broadway theater productions in 2018.

From Aaron Kaplan’s Kapital Entertainment, TELL ME A STORY is written and executive-produced by Kevin Williamson alongside Aaron Kaplan and Dana Honor.

Season one of TELL ME A STORY is currently available to binge on CBS All Access.”