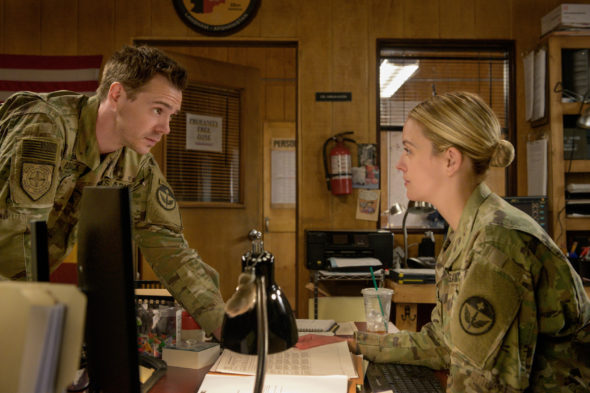 The battle is over at Paramount Network. The cable channel has cancelled the 68 Whiskey TV series so, there won’t be a second season.

A comedy-drama series, 68 Whiskey follows a multicultural band of Army medics stationed in Afghanistan on a base nicknamed “The Orphanage.” Together, the medics navigate a dangerous and sometimes absurd world, relying on comradery, various vices, and, occasionally, a profound sense of purpose to carry them through. The cast includes Sam Keeley, Jeremy Tardy, Gage Golightly, Cristina Rodlo, Beth Riesgraf, Lamont Thompson, Nicholas Coombe, and Derek Theler, with Usman Ally, Lamont Thompson, Artur Benson, and Aaron Glenane in recurring roles.

The first season of 68 Whiskey averaged a 0.10 rating in the 18-49 demographic and 499,000 viewers. Paramount Network has few original scripted series so it’s difficult to tell what is considered a success. The recently wrapped third season of Yellowstone averaged a 0.75 demo rating with 3.91 million viewers. Meanwhile, other series have drawn numbers that are closer to 69 Whiskey’s. Paramount does have a new series, Coyote starring Michael Chiklis, in the pipeline.

What do you think? Did you watch the first season of the 68 Whiskey TV series? Would you have watched season two on Paramount Network?

Well just thanks alot… but for God sake keep the masked singer and dancer on!!!