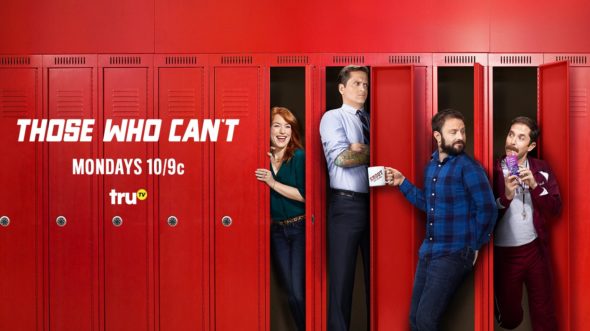 As its name indicates, truTV mostly airs unscripted TV series, but for the past few years, they’ve been incorporating scripted comedies into their original programming lineup. The Those Who Can’t TV show was the first such series. After a little more than two years off the air, it is back for a third season, but will there be any more? Will Those Who Can’t be cancelled or renewed for season four? Stay tuned. *Status update below.

In the changing world of television, TV execs look at many factors when deciding to renew or cancel a show. However, the ratings are still important. The higher the ratings, the better the chances for survival. This chart will be updated as new ratings data becomes available.

What do you think? Do you like the Those Who Can’t TV series? Should this truTV TV show be cancelled or renewed for a fourth season?

4/26/19 update: Those Who Can’t has been cancelled after three seasons on truTV.

Bold and Beautiful has had the same story over and over for the last 25 years. Time for some new actors…out with the old cafor they are going to change back to the same old partners again