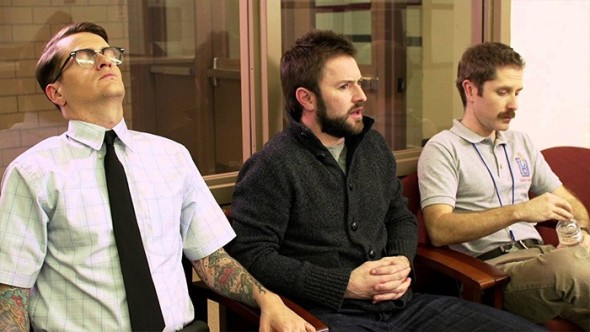 “I’m firing all of you!” TruTV just announced season three of Those Who Can’t will premiere in January.

Season three of Those Who Can’t premieres on truTV on January 14th at 10 p.m. ET/PT.

truTV is going back to school with the season three premiere of its scripted comedy Those Who Can’t on Monday, January 14th at 10:00 p.m. ET/PT.

Created by and starring Adam Cayton-Holland, Andrew Orvedahl and Ben Roy, members of the Denver-based comedy troupe The Grawlix, with Maria Thayer starring alongside, the series is truTV’s first-ever scripted project which premiered in 2016. It follows the faculty members of the fictional Smoot High in Denver, Colorado who are more inept than the kids they teach, and the outlandish exploits that take place inside the school’s walls. The series’ third season includes 13 half-hour episodes.

Those Who Can’t is executive-produced by Cayton-Holland, Orvedahl and Roy, alongside Tracey Baird and Krysia Plonka of Thank You, Brain! Productions; Michael Rotenberg and Josh Lieberman of 3 Arts Entertainment; and Richard Korson.”

What do you think? Have you seen Those Who Can’t? Will you watch season three?