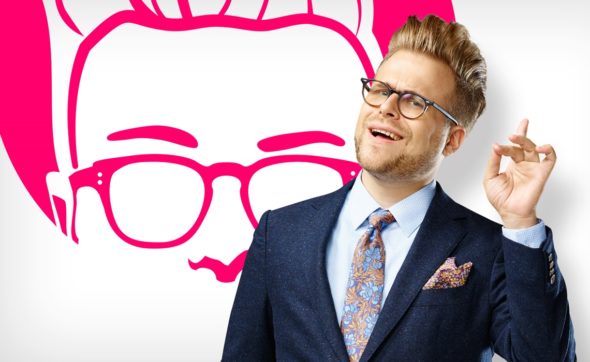 Adam Ruins Everything is coming back just in time for summer. TruTV just announced the TV show will return with new episodes in August.

New episodes of Adam Ruins Everything premiere on truTV on August 13th at 10 p.m. ET/PT.

July 8, 2019 – truTV has announced the return date for all new episodes of its investigative comedy series Adam Ruins Everything hosted by comedian Adam Conover. The series, which challenges viewers’ common beliefs and encourages them to think critically about the world around them, returns on Tuesday, August 13 at 10:00pm ET/PT with eight new half-hour episodes.

Among the topics Adam will be examining in this new batch of episodes are cops, a murder, America, and even little bugs. Adam exposes America’s flaws, polices the truth behind the overuse of SWAT teams, breaks down invasive search policies at the border, and explores why we should be eating more bugs.

Comedian and actor Pete Holmes (Crashing) will join Adam as a guest star in the season finale “Adam Ruins Himself,” as Adam battles with his own inner self-doubt over how his biases affect the show and the influence (or lack thereof) of advertising on the series’ integrity. Additional guest stars this season include Natasha Leggero (Another Period) in “Adam Ruins Music” and Tom Kenny (SpongeBob Squarepants) in “Adam Ruins Cops.”

Adam Ruins Everything has been hailed as “remarkable” (Den of Geek), “one of TV’s most intriguing hybrids” (IndieWire), while Conover himself dubbed a “genial provocateur” (The New York Times). The series made its television debut on truTV in 2015 after cultivating a fanbase as a series of digital shorts for CollegeHumor and has tackled a wide range of topics from football and weddings to immigration and prison. In 2018, Adam Ruins Everything reached 28 million total viewers.

What do you think? Are you a fan of Adam Ruins Everything? Will you watch the new episodes?

I have learned a LOT since I started watching this show, please don’t cancel it

This show isn’t educational. It’s very misleading. Some things he does is accurate but most political things he says is nonsense with lazy research. He’s funny at times but his politics are very misleading. His border wall, electoral college, guns control, poverty, Etc all lie about the truth. He is giving his opinions backed by crazy left wing sources like Vox or Rolling Stones, these aren’t quality sources.

Just recently binge watched 3 seasons. I am so hoping this series continues.

My family loves this show so much. The creators and Adam Conover have put an amazing take on learning and fun. So much so my son is always excited for the new episode everyweek. Please stay awesome and dont cancel this amazing show <3

Wonderful! Remarkable! Witty! Educational! Please have it continue in its raw stage. No holdbacks! Thank you.