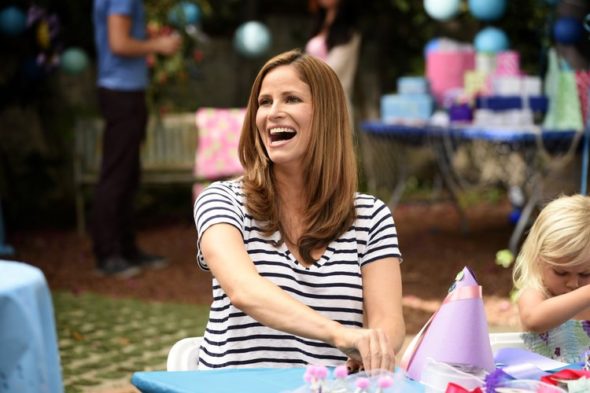 No need to apologize. Today, truTV announced season two of I’m Sorry will premiere in January.

From Andrea Savage, the comedy centers on writer Andrea (Savage) a wife and mother who outwardly projects confidence and composure. Inside though, she’s neurotic and immature, and this comes out during various events and circumstances. The cast also includes Tom Everett Scott, Olive Petrucci, Kathy Baker, Nelson Franklin, Judy Greer, and Jason Mantzoukas.

truTV has announced the season two premiere date for its highly anticipated – and completely unapologetic – comedy series I’m Sorry from creator and writer Andrea Savage (Veep, Episodes, Sleeping with Other People). Hailed by critics as “brazenly funny” and “razor-sharp,” the scripted series follows seemingly confident and together comedy writer, wife and mom Andrea (played by Savage), who comically exposes her inner immaturity and neuroses as life throws situations no one could have prepared her for.

This season, Andrea lands herself in new cringeworthy scenarios as she questions her theoretical market value as a prostitute, learns the downsides to having a child that can read, and discovers that comedy bits can sometimes go too far. Through it all, she is joined by her husband Mike (Tom Everett Scott), their inquisitive daughter Amelia (Olive Petrucci), and her divorced parents (Kathy Baker and Martin Mull).

The second season of I’m Sorry premieres on Wednesday, January 9 at 10pm ET/PT on truTV.”

What do you think? Have you seen I’m Sorry? Will you watch season two?

Love it!!! Hoping it returns for Season 3.

LOVE THIS SHOW! Just found it on Netflix and I have not stopped laughing!!! Thanks for the renewal TruTV!!!1

We absolutely LOVE this show and can’t wait for Season 2. We need our “I’m Sorry” fix! 🙂