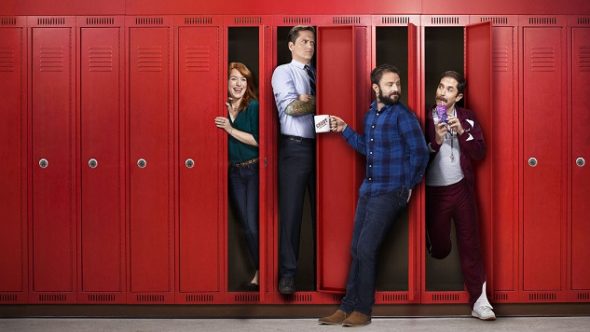 It looks like class is cancelled for Those Who Can’t. Co-creator Ben Roy announced the truTV show has been cancelled after three seasons.

On Twitter, co-creators Ben Roy, Adam Cayton-Howard, and Andrew Ovedahl confirmed Those Who Can’t will not be returning for a fourth season. Ratings for the truTV comedy have always been pretty low. Season three, which wrapped earlier this month, averaged .08 rating in the 18-49 demo and only 152,000 viewers.

See the creators’ comments below:

And that’s a wrap on #ThoseWhoCant. From the bottom of our hearts, thank you to everyone involved with the show and to everyone who ever watched. I couldn’t be prouder of the three seasons of television we made and the world we created. Smoot High Forever! pic.twitter.com/Pcyw0f5gfT

It's hard to convey in a tweet how much fun it was to make Those Who Can't and how many great people we met doing it. It was a dream job, and you don't get too many of those in life. Thanks to everyone who supported us, and hopefully we will be doing something fun for you soon!

What do you think? Are you a fan of Those Who Can’t? Would you have watched a fourth season?

My boyfriend and I are so disappointed to find out those who can’t was cancelled! It was such a great show. I really feel the viewer base was low because people didn’t know about it!

Please bring back those who can’t. It is my favorite show to watch with all my friends and family!!! Truly sad day…… 🙁

I waited for season 4 never to happen. Sucks I don’t laugh often. Loved this show. Guess my sort of taste wasn’t meant for this world.

Too bad they cancelled this show. I agree with the comments below, TruTv plays a TON of Impractical Jokers, like non stop, all day long. If they did that with this show, they’d have gotten an amazing following.
Too bad the great shows get cancelled and the crappy ones muscle on.

I loved this series! I hate when something you are looking forward to is cancelled. And let’s face it, TruTv is playing a lot of reruns of the same shows. Maybe if they had reran this they could have gotten followers.

This sucks….please do a 4th season

;__; Why does everything I love leave me?

Freaking love this show and have watched all 3 seasons four times already and it will remain one of my favorite shows! Hilarious and witty and should have never been cancelled. I have turned so many friends on to this show and sad that they don’t get to watch anymore seasons

Absolutely gutted this was cancelled. I’m sure there are many others like myself out there would would have watched a season 4.
Fingers crossed to someone seeing the potential here and reviving it on another channel or a streaming service.