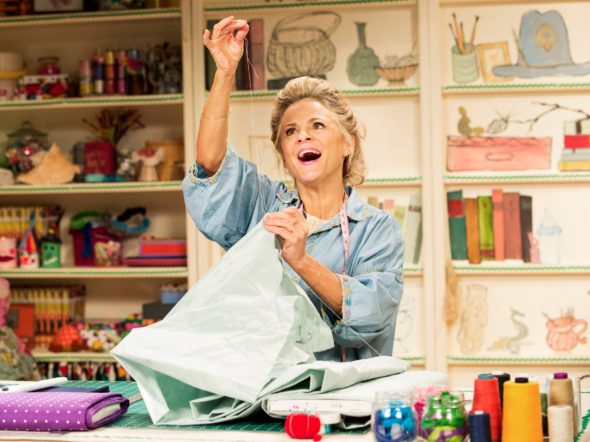 Amy Sedaris is shutting the doors to her home. At Home with Amy Sedaris has been cancelled, per Deadline, which means viewers will not see a fourth season on truTV. The series aired its third season last year, and it will now be available for viewing on HBO Max.

Sedaris and Paul Dinello co-created the surreal comedy-variety truTV series. Premiering in 2017, the series covers a variety of topics in comedic fashion with guest stars, character appearances, and more.

What do you think? Are you surprised that truTV has canceled the At Home with Amy Sedaris TV show? Did you want to see a fourth season of the series?

My heart is broken. Amy is an absolute, one of a kind treasure and we all need more of her and her friends and guests. This show was off the charts original and hilarious. I loved her outfits, the knife man, Patty Hogg & Leslie, and Chassie!! This show deserved more seasons. I assume many people didn’t see it because the channel is so bleh? (I only heard about it from a friend and gladly paid for three seasons on Prime video.) PLEASE Netflix- pick this up and let the flood gates open on seasons 4, 5 and 6!

The best part of the show was Patty Hogg by far, the worst was Michael Cera as a guest, and The Lady In The Woods character.
I do like Amy but it was too much on her, and the other characters were weak, and very spotty performances from celebrities. Justin Theroux, and Michael Sheen are the only ones who went all in on their characters.

I think that now that the show has gone through its growing pains and gotten better and better, it will be picked up by Apple or Hulu, much like Brooklyn911 was picked up and became a success after being cancelled by Fox.

After they dumped the much better “I’m Sorry “, I thought they’d keep this cheaper to make show. It was just fair. TruTV has had a few winners. This isn’t one.