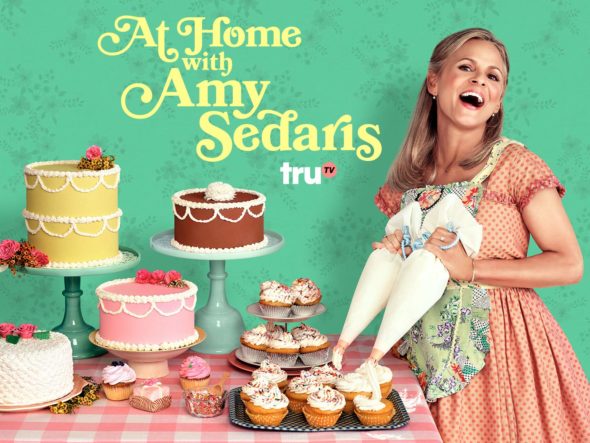 At Home with Amy Sedaris is returning to truTV for its third season next month, and a trailer teasing the return of the series has been released. This season, Amy will be joined by Michael Cera, Ann Dowd, Rachel Dratch, David Alan Grier, Debi Mazar, Paul Rudd, Justin Theroux and many others.

truTV revealed more about the return of the series in a press release. Check that out below.

“truTV invites guests back into the rich, imaginative – and slightly deranged – world of At Home with Amy Sedaris for the 10-episode third season of the Emmy(R)-nominated variety sketch series. Returning on Wednesday, May 20 at 10:00pm ET/PT, the show was created by Amy Sedaris and showcases her unique, distinctive brand of hospitality each week.

Each week of At Home with Amy Sedaris touches on a specific theme and features imaginative characters, how-to demonstrations, special guests, and more. Subversive twists take segments in delightfully eccentric directions as Sedaris demonstrates her cooking, crafting, and homemaking skills. New topics explored this season include preparing for a baby, the do’s and don’ts of travel, how to celebrate Easter, and what to expect on a first date.

The series has become a critical hit since its debut in 2018, with season two being hailed as “close to genius” (People) “magical” (The New York Times) and “just plain strange as hell” (Vulture). The show has earned back-to-back Emmy(R) nominations in the Variety Sketch category and WGA Award nominations in the Comedy/Variety Sketch Series category.

Season three of At Home with Amy Sedaris is produced by A24 with Sedaris serving as executive producer.”

Check out a trailer for season three of this series below.

What do you think? Are you a fan of At Home with Amy Sedaris? Will you watch season three?

I love her but the writing is very hit or miss on the show. My absolute favorite is Patty Hogg, and least favorite is the lady who lives in the woods (I mute or fast forward on her parts). Sometimes the guests go all in like Justin Theroux, and others seem like they’re only in it for the paycheck.