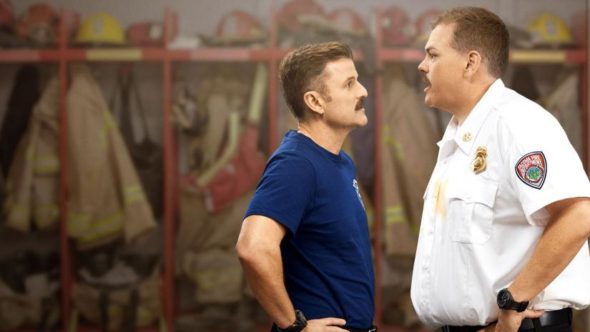 Tacoma FD is getting ready for its return to truTV. The network announced the series will return with its second season in March. Season two will have three more episodes than the show’s first season.

In its first season, the season averaged 359,000 viewers per episode. As for our on-site viewer voting, Tacoma FD averaged 9.70.

truTV revealed more about the return of the series in a press release. Check that out below.

“truTV has announced the season two premiere date for its red-hot hit Tacoma FD, the half-hour comedy set in a firehouse in one of America’s rainiest cities. The scripted series returns Thursday, March 26 at 10:00pm ET/PT with thirteen all-new episodes, an increased order from season one’s ten-episode run. Created by and starring Broken Lizard’s Steve Lemme and Kevin Heffernan of the Super Troopers franchise, the series was the number three new cable comedy of 2019.

This season, the squad finds themselves fighting fires at a haunted house, trapped in an elevator during the annual Firefighter’s Ball, and creating fire safety videos with the buffest group of firefighters in Tacoma. Chief Terry McConky (Heffernan) and Captain Eddie Penisi (Lemme) lead the firehouse shenanigans and are joined by an eclectic crew played by Eugene Cordero (Andy), Marcus Henderson (Granny), Gabriel Hogan (Ike) and Hassie Harrison (Lucy). Light on blazes that need extinguishing, these firefighters keep themselves entertained with creative competitions, friendly first responder rivalries and no shortage of bizarre emergency calls.”

Check out a preview for the new season of Tacoma FD below.

What do you think? Are you a fan of this truTV series? Will you watch season two?