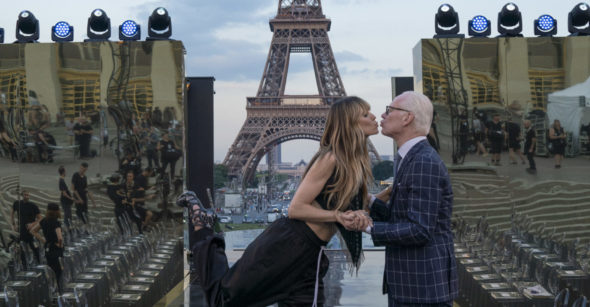 Making the Cut is coming soon to Amazon Prime, and a date has now been set! The new fashion competition series is being hosted by Heidi Klum and Tim Gunn, and it will arrive on the streaming service in March.

Amazon revealed more about the new series, including the designers competing, in a press release. Check that out below.

“Amazon Original series Making The Cut, hosted and executive produced by Heidi Klum & Tim Gunn, will premiere on Prime Video on Friday March 27, 2020. The 10-episode fashion competition series, which brings together a diverse group of 12 talented entrepreneurs and designers, will premiere two new episodes each week, culminating in an epic finale on April 24, 2020.

In this first-ever global and instantly shoppable series, limited editions of the winning look from each episode will be available for purchase exclusively on Amazon Fashion in the Making the Cut store. During the course of the season, those who do not “make the cut” will be eliminated, with the winning designer from the finale receiving one million dollars to invest in their brand and the opportunity to create an exclusive line available on Amazon Fashion.

The dozen designers featured on Making the Cut will visit three of the world’s fashion capitals – New York, Paris, and Toyko – and face challenges and assignments that will test not only their design skills but also their ability to run all aspects of a business. Judging their looks and industry acumen are some of fashion’s most recognizable and influential names, including Naomi Campbell, Nicole Richie, Joseph Altuzarra, Carine Roitfeld and Chiara Ferragni. The series is executive produced by Sara Rea, Page Feldman, Heidi Klum, Tim Gunn and Jennifer Love, directed by Ramy Romany and produced by Amazon Studios and SKR Productions.

The 12 Designers competing for an opportunity of a lifetime are:

Sander Bos, 24, Hasselt, Belgium: Featuring avant-garde inspired looks, Bos is a young designer who runs his namesake line. Raised in a small town in Belgium, he is a graduate of the Royal Academy of Fine Arts in Antwerp and is eager to make his mark on a global scale.

Rinat Brodach, 35, New York City: Brodach was a fan of fashion from an early age while growing up in in Israel and later came to the US to study design. Her eponymous line features a minimalist chic, gender-free aesthetic, reflecting her own straightforward personality. She recently dressed Billy Porter for the Critics’ Choice Awards and her designs have also been worn by Laverne Cox and Adam Lambert.

Ji Won Choi, 26, New York City: The Parson graduate is a designer of elevated, active streetwear that she sells under her namesake brand and has collaborated with Adidas, with pieces worn by Beyoncé and Kendall Jenner. Born in Seoul, South Korea, raised in Oklahoma, and educated in New York City and Paris, her work is a reflection of how Choi sees herself in the world.

Jasmine Chong, 31, New York City: Born and raised in Kuala Lumpur, Malaysia, Chong is the owner of her self-titled feminine ready-to-wear line, has previously shown at NYFW and her line has been featured in a number of fashion magazines. Inspired by her seamstress grandmother and her fashion designer mother, she is focused on creating beautiful clothing that appeals to all body types.

Martha Gottwald, 28, Richmond, VA: The Louisiana native and mother of two is owner of the womenswear brand Neubyrne and has been featured in British Vogue and shown at NYFW. Like Gottwald herself, Neubyrne embraces color and whimsicality. The survivor of a near fatal car accident that taught her about strength and endurance, she is a relatively new designer who was inspired by artisans she met in Singapore.

Troy Hul Arnold, 34, New York City: An adjunct professor at Parsons, Hul Arnold was born in Trinidad and Tobago before coming to the US as a child. His brand, Hul Arnold, features minimalist, avant-garde menswear inspired looks for women; one of his designs was worn by Sarah Jessica Parker on Glee. Hul Arnold takes an artisanal approach to his fashion, and he refers to his pieces as functional sculptures.

Joshua Hupper, 38, Shanghai, China: Founder of BABYGHOST, a wildly successful e-commerce fashion brand based in China, Hupper’s designs have been featured in Vogue and on runways around the world. His line features youthful, feminine ready-to-wear fashions for the “mischievous girl.” Originally from Columbus, Ohio, Hupper’s talents were shaped by his artistic upbringing and internships with Diane Von Furstenburg and Thakoon.

Esther Perbandt, 43, Berlin, Germany: Founder and namesake Esther Perbandt was born and bred in Berlin, toughened up in Moscow and polished in Paris. Owner of her eponymous line, which features edgy, menswear-inspired separates, Perbandt has created more than 30 collections over the brand’s 15 year history and has been running her highly successful boutique in Berlin for ten years. As an artist, she has also collaborated on countless music, film and theatre projects.

Will Riddle, 31, New York City: Riddle’s design skills, featuring a modern take on old glamour, have led to a series of impressive jobs, including Atelier Director at Oscar de la Renta, 3.1 Philip Lim, and now men’s designer at Kith – a far journey from growing up in a trailer park in Ohio. With an impressive resume under his belt, Riddle is ready to start his own label.

Sabato Russo, 64, Milan, Italy: A seasoned designer with a 25-year career in the industry, Russo is owner of the brand Satorial Monk, which focuses on high end simplicity. A former model who is able to speak four languages, Russo has a global point of view that is reflected in his sophisticated, timeless looks. Russo is currently working on his “Made in Italy” line entitled Sabato Russo.

Megan Smith, 38, Los Angeles, CA: Born and raised in Kansas City, KS, Smith first discovered her love of fashion design while creating clothes for her Barbie dolls. After designing private label for several major bands and retailers, Smith branched out and launched her own line “Megan Renee.” The response to her first runway show during Los Angeles Fashion Week was so overwhelming, she launched her online boutique to sell her collections to customers worldwide. Her line features feminine, 70’s inspired cocktail attire.”

What do you think? Will you watch Making the Cut once it arrives on Amazon?

As a former fan of Project Runway, I looked forward to seeing this new program. I have already watched the first two episodes. I realize that the designers have already established themselves as experts in the field. Still, I think that one grows from feedback delivered in a gentle and compassionate way. World-renowned supermodels-turned judges should remember their humble beginnings before rendering an evaluation in a scolding and harsh manner. The judges are the ones with the power to make or break an aspiring designer, but breaking a person’s spirit sometimes appears to be the goal. Would it be possible… Read more »

As a fan of Project Runway, I looked forward to this new concept. I have viewed the first two shows. I realize that the designers have already established themselves as experts in the field. Still, I think that one grows from feedback delivered in a gentle way, and that world-renowned supermodels (some of the judges) need to remember how they started before rendering harsh evaluations that can break a designer’s spirit.

Can’t wait, to see this show. I do miss them on Project Runway.

Can’t wait to see how Tim & Heidi have evolved the fashion design competition. The contestants seem quite experienced so we won’t have the frustration of people whining about about how they have never sewn or cut a pattern. No twins-thank you very much. Hopefully fun ideas but not over the top stupid.

Why is this show only on for a month? That’s not even worth watching. This show might not last.