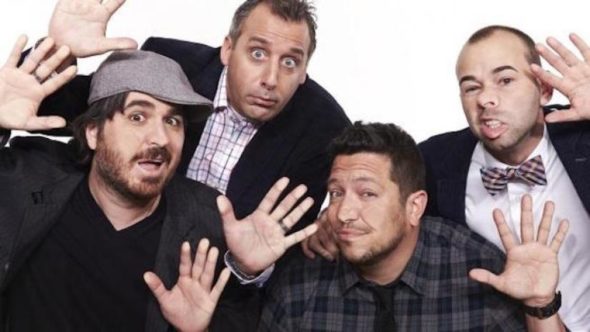 This ain’t no joke. Deadline reports truTV has renewed Impractical Jokers for an eighth season.

truTV has ordered 26 episodes for season eight of Impractical Jokers. Additionally, Funny or Die is producing a film based on the TV show with Chris Henchy attached to direct.

What do you think? Are you a fan of Impractical Jokers? Are you glad it’s been renewed?

I like Impractical Jokers but Tru Tv plays the show WAY WAY WAY to much, every day is a marathon at least give other shows a small chance to be seen.

I really don’t understand the appeal of this show. I find it VERY juvenile and not funny at all.

Are you kidding me? Yes, it is juvenile…Who the hell wants to grow old and forget to laugh? I love these guys, the authenticity, and showmanship they have! I am eager to watch the next episode of season 8…Perhaps they are running out of ideas. But, as an entertainer myself, as well as a teacher of huge history of grade levels and subjects, I think working within more “public” forms, i.e. political rallies, schools (i.e. posing as a sub in a school, falling asleep in a theatre class, for example, etc. would be hilarious!