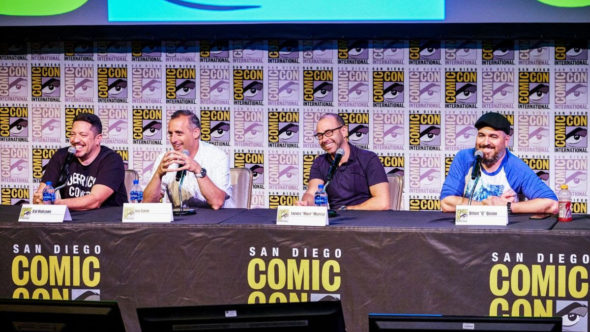 The laughs will continue into 2020 on truTV. The cable channel has renewed the Impractical Jokers TV show for a ninth season of 26 episodes. Season eight of the series will resume on Thursday, August 8 at 10:00pm ET/PT.

Here’s a press release about the ninth season renewal:

Los Angeles, July 20, 2019 – WarnerMedia’s truTV announced today a ninth season order of its flagship original series – and cable’s #1 original comedy – Impractical Jokers, which guarantees more hidden-camera hijinks from James “Murr” Murray, Brian “Q” Quinn, Joe Gatto and Sal Vulcano on the network through 2020. The announcement was made by the four stars and lifelong friends in front of thousands of their fans on Saturday night at the fourth annual Impractical Jokers fan event at the Park at Petco Park in San Diego during a special live streamed Q&A.

The 26-episode order produced by NorthSouth Productions continues to build on the franchise’s massive success, which is anchored by the television series’ run as one of cable’s longest-running and consistently top-rated original comedies. Currently in its eighth season, Impractical Jokers ranks as the #1 comedy series in cable among P18-49, delivering an average of 768,000 people in Live +7 viewing and reaching more than 1.2 million total viewers each week. Created and executive produced by its stars Joe, Murr, Q and Sal – collectively known as the comedy troupe The Tenderloins – the series recently filmed its landmark 200th episode, which is slated to premiere early next year.

In addition to a reprise of its annual fan event in San Diego, truTV brought Impractical Jokers to Comic-Con® International for its first-ever panel this year, “Impractical Jokers: From Hidden Camera to Worldwide Success.” During the panel, the guys also shared with fans a first look at their upcoming series The Misery Index, a comedy game show hosted by Jameela Jamil and featuring The Tenderloins as recurring panelists, which will premiere on Tuesday, October 22nd on TBS.

“For us it’s a no-brainer to bring this show back for a ninth season and give the fans what they demand,” says Brett Weitz, general manager TNT, TBS, and truTV. “The guys consistently bring the funny and we are proud to be home to their hilarious antics.”

Since its debut on truTV in 2011, the Impractical Jokers television series has translated its fandom into an international, multi-platform and experiential juggernaut that includes sold-out live shows and fan events, an annual themed cruise which next sets sail in February 2020, a growing retail and consumer product business, and a mobile museum installation that will travel to three tour stops this summer after an exhibition at the Staten Island Museum.

About truTV
truTV is the home for original, creator-driven comedy series with a distinct point of view. With millions of engaged fans across linear, digital and social channels, the cable network features a growing roster of critically acclaimed and fan-favorite premium scripted, non-scripted and hybrid series, such as Adam Ruins Everything, At Home with Amy Sedaris, I’m Sorry, Impractical Jokers, Paid Off with Michael Torpey, Tacoma FD, The Carbonaro Effect, and more. As a division of WarnerMedia, truTV is also a partner in airing the NCAA Division I Men’s Basketball Championship each year.

What do you think? Do you like watching the Impractical Jokers TV show on truTV? Will you check out the rest of season eight or season nine in 2020?

Impractical Jokers is the funniest show to ever come to the television! I am so hard to please & I adore this show. Tops Seinfeld, Tosh.0, Arrested Development & Brooklyn 99… it’s just too funny! I have watched them over & over & they never get old. My husband & kids are the same way. My little brother is in college & he watches them religiously. This show is a gem! It’s priceless! We wait on the edge of our seats for new ones! They’re like gold! More Impractical Jokers, PLEASE!!!

Just recently started watching the show and love it. Cheers me up when had a bad day.

I love the show.. They are so funny. I would be so upset if this show went off the air. I can have the worst day, all I have to do is put them on my T.v and BOOM! my day is forgotten. Love them❤

I would say yes because they take the punishment way to extreme and I love the guys because they make us fans laugh so hard to the point where we either lose voices and ect. And I like all of them together wish their friendship will last

I love this show I can so relate to this show becuz I wud do these things with a bunch of friends with a sense of humor it is do genius I hope it stays on the air for a long time I laugh so hard with the stuff u guys do I wud love to b in this show u guys wud b fun we dont have this in canada and we shud I wud love to have a show like that here to c how canadians wud act like wen these things happen! Anyways let me know if… Read more »

I am so so glad!!! ❤️ These 4 amazing men, have got me through some of the worst times in my life. **No Word of a Lie!! ** They were born special and meant to make people smile. ☺ I would say keep renewing for years yet, but at some point you guys will need to find proper time for yourselves and loved ones.. (Speaking of which, I wouldn’t mind being a part of it – Brian!! ❤️) Anyway, on a final note – I truly Thank You.. All, from the bottom of my heart for making me smile ☺… Read more »