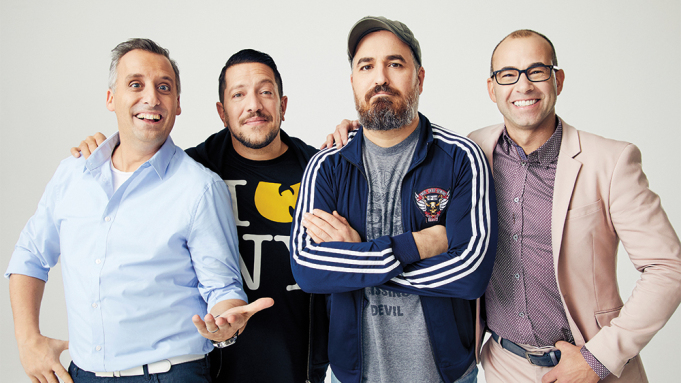 As for The Misery Index, the same quartet join Jameela Jamil. This series shows two teams ranking moments of life on a scale from 1-100. Which is the worst moment?

TBS and truTV revealed more about the episode orders in a press release.

“WarnerMedia Entertainment is proud to embrace the consistently growing strength of truTV’s tentpole franchise Impractical Jokers across the company’s cable and streaming platforms. The widely popular line-up of programming featuring Joe Gatto, James “Murr” Murray,Brian “Q” Quinn, and Sal Vulcano, collectively known as the comedy troupe The Tenderloins, is a proven fan-favorite and a ratings draw across the board. In addition to resuming production on Impractical Jokers Season 9, the company has ordered a third season of TBS’s The Misery Index and 10 additional episodes of truTV’s Impractical Jokers: Dinner Party, as well as the streaming premiere of Impractical Jokers: The Movie on HBO Max on September 1.

“The Impractical Jokers franchise continues to deliver each and every time,” said Brett Weitz, General Manager of TNT, TBS and truTV. “The plan is continue to grow their business from an incredibly solid foundation and deliver to a passionate fanbase that’s second to none.”

“We’re excited to continue growing the Impractical Jokers franchise with WarnerMedia. We’re excited to use the word franchise. Each new project or season, we are pushing ourselves to make it bigger, better and funnier than the last,” said The Tenderloins. “Thanks to our insanely loyal fans over the past year, we’ve really been able to stretch ourselves and have had a blast bringing projects to life, including our first feature film and a TV show filmed from our separate homes. Whether its Impractical Jokers, Impractical Jokers: Dinner Party, The Misery Index or something new, we’re thrilled to keep working with each other and making people laugh.”

Ranked as one of the top 10 cable comedies of 2020 and growing in viewership season over season, The Misery Index has received a third season order from TBS. Beginning production this fall, The Misery Index Season 3 will continue to be hosted by Jameela Jamil with the cast of the Impractical Jokers returning as panelists. Additionally, the second half of Season 2 is set to air on TBS in October 2020. Inspired by the card game Sh*t Happens, teams compete against each other by attempting to rate hilarious and miserable real-life events based on the “misery index”, a ranking system created by a team of therapists. The Misery Index was developed by comedy writer Andy Breckman, along with Ben & Dan Newmark for Grandma’s House Entertainment. The series is produced by Grandma’s House Entertainment, with the Newmarks serving as executive producing alongside Breckman, Gatto, Murray, Quinn, Vulcano, Michael Bloom for Bongo Pictures, Howard Klein for 3 Arts Entertainment, and Jack Martin, who also serves as showrunner.

truTV’s tentpole series Impractical Jokers, which is currently ranked as cable’s #1 unscripted comedy in 2020, is set to resume production on Season 9 in late August.

Cable’s #1 new unscripted comedy series, the remotely-shot Impractical Jokers: Dinner Party has been picked up by truTV for 10 additional episodes, which will air in fall 2020. The new episodes will expand on the remote format as the cast safely, and hilariously, connect with each other and their beloved neighborhoods. Impractical Jokers: Dinner Party is produced by Bongo Pictures, with Michael Bloom executive producing alongside Chris Wagner, Quinn, Murray, Gatto, Vulcano and DeBevoise.”

What do you think? Are you a fan of these shows on TBS and truTV? Will you watch The Misery Index and Impractical Jokers when they return?

I’m all for more of the Jokers, but I don’t really watch The Misery Index. I prefer Impractical Jokers. But that’s good news.