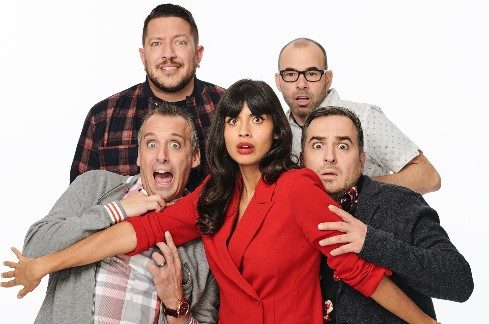 The Misery Index is returning with brand new episodes from its second season this fall. Fans already know that the TBS comedy series has already been renewed for a third season, but the rest of season two comes first. Brian “Q” Quinn, James “Murr” Murray, Joe Gatto and Sal Vulcano are featured in the series. A trailer for the new episodes was also released.

“Beginning Tuesday, October 20, at 10:30pm ET/PT on TBS, host Jameela Jamil joins the stars of truTV’s Impractical Jokers – Brian “Q” Quinn, James “Murr” Murray, Joe Gatto and Sal Vulcano – for all new episodes of the comedy game show The Misery Index. Inspired by the card game Sh*t Happens, teams compete against each other by attempting to rate hilarious and miserable real-life events based on the “misery index”, a ranking system created by a team of therapists. The series return will feature themed episodes including a twins-centric battle, a dare to regret, and a special holiday episode with the final round worth $50,000. Ranked as one of the top 10 cable comedies of 2020, The Misery Index was recently renewed for a third season.

Check out the preview for the return of season two of this TBS series below.

What do you think? Are you a fan of The Misery Index TV show on TBS? Will you watch the new episodes of this comedy series?