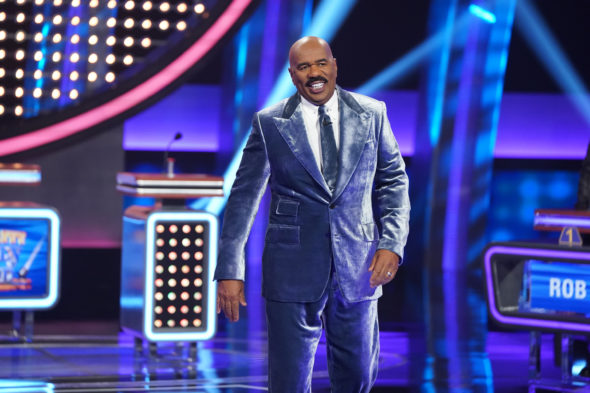 “Survey says…” renewal? Has the Celebrity Family Feud TV show been cancelled or renewed for an eighth season on ABC? The television vulture is watching all the latest cancellation and renewal news, so this page is the place to track the status of Celebrity Family Feud, season eight. Bookmark it, or subscribe for the latest updates. Remember, the television vulture is watching your shows. Are you?

Airing on the ABC television network, Celebrity Family Feud is hosted by Steve Harvey. Just as on the original Family Feud series, celebrities and their family and friends try to guess the most popular answers to surveys of 100 members of a past studio audience. The difference is, in this version, they’re playing for up to $25,000 for charities. Contestants in season seven include Rob Lowe, Terrence Howard, Zach Braff, Donald Faison, Neil Flynn, Wendi McLendon-Covey, Patrick Warburton, Dee Snider, Terry Bradshaw, JoJo Siwa, Ross Mathews, and Loni Love.

The seventh season of Celebrity Family Feud averaged a 0.63 rating in the 18-49 demographic and 4.66 million viewers. Compared to season six, that’s down by 16% in the demo and down by 10% in viewership in the live+same day ratings (including DVR playback through 3:00 AM). While these numbers don’t include further delayed or streaming viewing, they are a very good indicator of how a show is performing, especially when compared to others on the same channel. There can be other economic factors involved in a show’s fate, but the higher-rated series are typically renewed and the lower-rated ones are cancelled. Find out how Celebrity Family Feud stacks up against other ABC TV shows.

Will ABC cancel or renew Celebrity Family Feud for season eight? Given that Harvey also hosts the regular syndicated version of this show, I think there’s a very good chance that the celebrity version will continue. I’ll update this page with breaking developments. Subscribe for free alerts on Celebrity Family Feud cancellation or renewal news.

4/7/22 update: Celebrity Family Feud has been renewed for an eighth season on ABC.

What do you think? Are you glad that the Celebrity Family Feud TV show has been renewed for an eighth season? How would you feel if ABC had cancelled this TV series, instead?

Well they’re definitely taping season 8 of Celebrity Family Fued now. I’ve seen Celebrities like Da Brat and her wife Judy, Sheryl Lee Ralph post photos on IG about having fun and finally being on the show. So now the question is when will these new episodes actually air???

Marion Witt with a a

We love to watch Family Feud. I don’t like Celebrity Family Fued. They act like complete idiots on it. It is not entertaining.