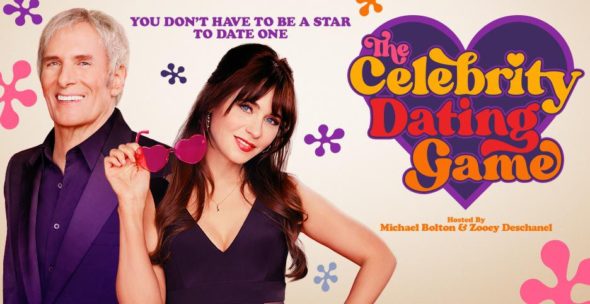 The Celebrity Dating Game is hosted by actress Zooey Deschanel and singer-songwriter Michael Bolton. The first season includes Hannah Brown, Nicole Byer, Carson Kressley, Iggy Azalea, Taye Diggs, and Demi Burnett. The series is a modern take on the classic game show but this version features a roster of celebrity singles all trying to find love. Offering the same iconic feel as the original, each episode follows two celebrities who each pick one lucky suitor from a hidden panel of three bachelors and/or bachelorettes based on answers to a variety of questions. In a twist, the celebrity identities remain a mystery to their suitors, who are given clues via parody song performances by Bolton. Is there love in the air?

8/17 update: You can see the latest night’s ratings in context.

What do you think? Do you like The Celebrity Dating Game TV series on ABC? Should it be cancelled or renewed for a second season?

*4/4/22 update: The Celebrity Dating Game has reportedly been cancelled on ABC.

The Dating Game show stinks. Maybe with different hosts it might work. Zoey and Michael Bolton are horrible! Do we need any more terrible programs? Cancel, cancel, cancel!!!!!

Why did they already show a repeated show after only two weeks??? Surely they can find enough desperate people to be on the show. I don’t want to watch repeats for a new show!

ABSOLUTE AWFUL !! The worst is Michael Bolton, wasn’t even sure if he was breathing or heart pumping. He has zero personality or can’t even manage a fake smile. Zoey way too corny trying too hard, poor thing trying to keep it afloat. All around struggle to watch. I can’t believe how cheap it seemed to have been produced. Quality Television where have you gone ??

They need Good Host. They Couldn’t have interviewed for this show.

Cancel. This has to be the worst show ever made. Celebrity is a very loose term. Awkward, cringe-worthy. Someone needs to check to see if Michael Bolton is still breathing. Boring, stiff, just plain awful. Never seen so many people on one show look like they would rather sink into a hole. Don’t waste your time.

Why? I tried. My problem? Hannah Brown! At the same time she was a contestant on the show she was gushing about her boyfriend on social media. Girl, bye! Michael Dullton was stiff and boring. Zoey was corny, not funny. It needs a Neil Patrick Harris or Andy Cohen or a comedian! All this and I only watched 6 minutes! Lol. Cancel, because it is a ruse.

Get rid of Michael Bolton!!!

Has to be one of the worse shows on tv. I cringed and turned it off within 10 minutes.
Michael Bolten, hardly anyone clapped when he was introduced lol
The host, why was she jumping around?
Anyone who thinks this show is good tells you about the mentality of our society lol
Cancel the show

Celebrity dating game was one of the worst TV shows I have ever seen.
The hostess, Zooey, was dressed in a frock that I wore to kindergarten. She was stiff and seemed very uncomfortable.
As for Mr. Bolton, all I have to ask is why? The poor man sat through most of the show looking like he was waiting for the bus. Surely this was a great waste of his talent.
The concept of the show is certainly doable. It needs a comedic, wisecracking host, and some lively filler music.
The new show needs to be fun.

Renew I love it