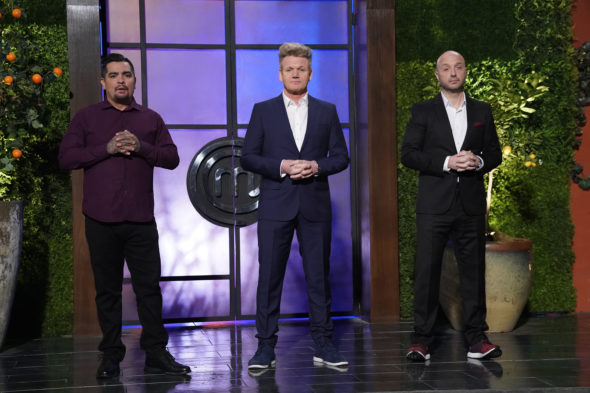 Does Gordon Ramsay still have a home on FOX? Is the MasterChef TV show cancelled or renewed for a 10th season on FOX? The television vulture is watching for the latest cancellation and renewal news, so this page is the place to track the status of MasterChef, season 10. Bookmark it, or subscribe for the latest updates. Remember, the television vulture is watching your shows. Are you?

A FOX cooking competition, MasterChef features talented home cooks battling for the title and the grand prize of $250,000.00. After a four year break, restaurateur Joe Bastianich returns to join host-chef Gordon Ramsay chef Aarón Sánchez on the season nine judging panel. In addition to the usual elimination, tag team, and restaurant takeover challenges, this time out each of the judges will select a team of contestants to mentor throughout the season.

The ninth season of MasterChef on FOX averaged a 1.00 rating in the 18-49 demographic and 3.52 million viewers. Compared to season eight, that’s down by 9% in the demo and down by 3% in viewers. Find out how MasterChef stacks up against the other FOX TV shows.

Will FOX cancel or renew MasterChef for season ten? The ratings have been pretty consistent. So, unless something unexpected happens, I’m sure it will be renewed. I’ll keep an eye on the Nielsens and update this page with breaking developments. Subscribe for free MasterChef cancellation and renewal alerts.

What do you think? Are you glad that the MasterChef TV show has been renewed for a 10th season? How would you feel if FOX had cancelled this TV series, instead?