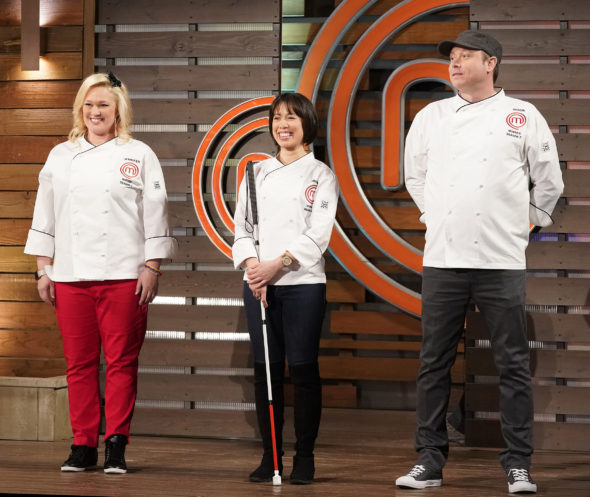 Is the 10th season of the MasterChef TV show on FOX satisfying your appetite? As we all know, the Nielsen ratings typically play a big role in determining whether a TV show like MasterChef is cancelled or renewed for season 11. Unfortunately, most of us do not live in Nielsen households. Because many viewers feel frustration when their viewing habits and opinions aren’t considered, we’d like to offer you the chance to rate all of the MasterChef season 10 episodes here. *Status update below.

A FOX cooking competition series, MasterChef features talented home cooks battling for the title and the grand prize of $250,000.00. Chef Aarón Sánchez, Joe Bastianich and host-chef Gordon Ramsay have all returned to the season 10 judging panel. In addition to the usual elimination and tag team challenges, this time out the competing cooks are catering a former MasterChef winner’s wedding reception. For the restaurant takeover they are traveling to England to take over Ramsay’s flagship London restaurant, Restaurant Gordon Ramsay.

What do you think? Which season ten episodes of the MasterChef TV series do you rate as wonderful, terrible, or somewhere between? Should FOX cancel or renew MasterChef for an 11th season? Don’t forget to vote, and share your thoughts, below.

Why can’t the most deserving home chef win? I have been watching Masterchef for the last ten seasons but I will not watch this show anymore. It is obvious to me and anyone else who is a true fan of the show that the trophy is now awarded to the person with the best life story not with the best culinary expertise. Nick by far was the most talented, innovative and as close to a Michelin star chef that will ever be on the show. Since the winner was obviously predetermined, all my friends now refer to the show not… Read more »

The final show was very unfair. It’s not called Master home cooking it’s called MasterChef. I feel the judges have made a big mistake of not choosing Sarah. She was clearly a Master Chef in the kitchen. The judges felt sorry for Dorian. In conclusion my family and friends have watched your show every year for 10 years and now it’s come to an end we will not watch any more episodes because of the choice you made.

My wife and I religiously watch master chef and have been watching for several seasons now. We always find the judges to be objective and making the right decisions. However in the last episode on Wednesday, September 11, the decision seemed poor, unfair, biased and done for the wrong reasons. Sure, Noah did not perform in the last team challenge but team challenges have outcomes based on the losing team and that is the rule. However in this last episode, Nick obviously made a few fatal mistakes including the string on the venison, not much vegetables, and a pretty disastrous… Read more »