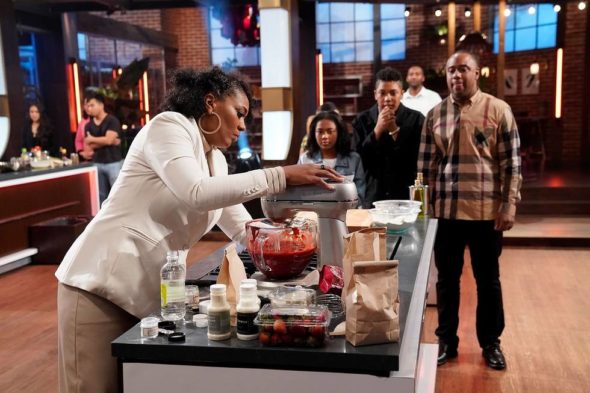 Will this season be legendary? Has the MasterChef TV show been cancelled or renewed for a 12th season on FOX? The television vulture is watching all the latest cancellation and renewal news, so this page is the place to track the status of MasterChef, season 12. Bookmark it, or subscribe for the latest updates. Remember, the television vulture is watching your shows. Are you?

Airing on the FOX television network, the MasterChef TV show features award-winning chef Gordon Ramsay, acclaimed chef Aarón Sánchez, and renowned restaurateur Joe Bastianich as they judge the work of culinary competitors alongside iconic kitchen legends like Emeril Lagasse, Paula Deen, Roy Choi, Nancy Silverton, and Morimoto. For the first time, only 15 of the best home cooks in America will receive the coveted white apron and impress four legends with all new challenges, including the toughest yet — a head-to-head battle with Ramsay. Only one home cook will ultimately claim the Masterchef title, the $250,000 grand prize, a complete Viking kitchen, and kitchen tools and bakeware products from OXO.

The 11th season of MasterChef averaged a 0.58 rating in the 18-49 demographic and 2.51 million viewers. Compared to season 10, that’s down by 24% in the demo and down by 18% in viewership in the live+same day ratings (including DVR playback through 3:00 AM). While these numbers don’t include further delayed or streaming viewing, they are a very good indicator of how a show is performing, especially when compared to others on the same channel. There can be other economic factors involved in a show’s fate, but typically the higher-rated series are renewed and the lower-rated ones are cancelled. Find out how MasterChef stacks up against other FOX TV shows.

Will FOX cancel or renew MasterChef for season 12? Gordon Ramsay TV series have been a big part of the FOX schedule for more than a decade and I don’t think that will end anytime soon. I think MasterChef will be renewed. I’ll update this page with breaking developments. Subscribe for free alerts on MasterChef cancellation or renewal news.

What do you think? Are you glad that the MasterChef TV show has been renewed for a 12th season? How would you feel if FOX had cancelled this TV series, instead?

Please don’t. This will be my year! Season twelve!