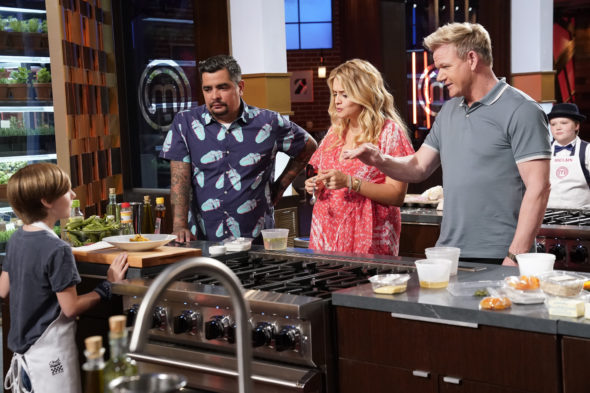 A FOX competitive reality TV series, MasterChef Junior features home cooks between the ages of eight and 13 years, vying for the title, trophy, and a $100,000 cash prize. Judges and mentors are chef Gordon Ramsay, chef Aarón Sánchez and nutrition expert Daphne Oz. In season eight, the pint-sized contestants cook a meal for diners at a historical renaissance fair; see how they size up to monster trucks at a motocross track; welcome Ramsay’s daughter, Tilly, for a donut challenge; and participate in a WWE-themed episode.

What do you think? Which season eight episodes of the MasterChef Junior TV series do you rate as wonderful, terrible, or somewhere between? Do you think that MasterChef Junior should be cancelled or renewed for a ninth season on FOX? Don’t forget to vote, and share your thoughts, below.

The motocross episode was horrendous. Expecting children to make 51 meals, yelling at them when it is not perfect, and Ramsay throwing food is not what a mentor or chef should be doing.