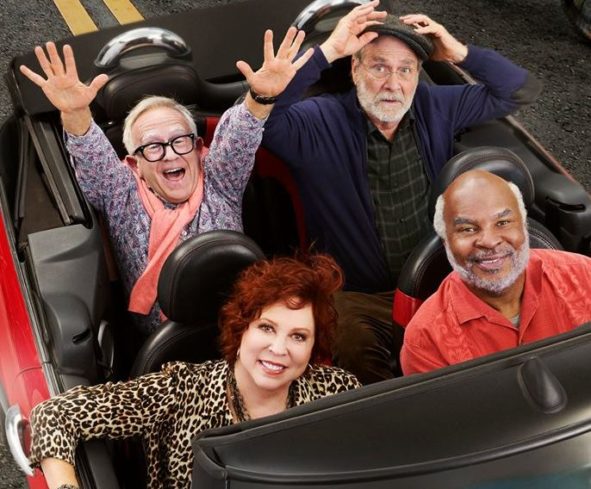 Are these active seniors too crazy for television? Has The Cool Kids TV show been cancelled or renewed for a second season on FOX? The television vulture is watching for the latest cancellation and renewal news, so this page is the place to track the status of The Cool Kids, season two. Bookmark it, or subscribe for the latest updates. Remember, the television vulture is watching your shows. Are you?

The first season of The Cool Kids on FOX averaged a 0.83 rating in the 18-49 demographic and 4.18 million viewers. Find out how The Cool Kids stacks up against the other FOX TV shows.

Will FOX cancel or renew The Cool Kids for season two? The ratings have fallen quite a bit but I am sure that Cool Kids will still get renewed. I’ll keep an eye on the Nielsens and update this page with breaking developments. Subscribe for free The Cool Kids cancellation and renewal alerts.

What do you think? Were you hoping that The Cool Kids TV show would be renewed for a second season? Are you sorry that FOX cancelled this TV series, instead?

I can’t believe this show was canceled.
They dont give it time.

Well this is not Cool!! Everyone I know loved this show, including my God daughter and her friends.

My wife and i loved the cool kids. But it doesn’t matter that it was a good comedy for Boomers. It’s all about the ratings!!! The $$$. I wonder how the ratings were for , All in the family, or MASH their first season? Bring it back!!!

Bring the cool kids back! It’s a great funny show!!