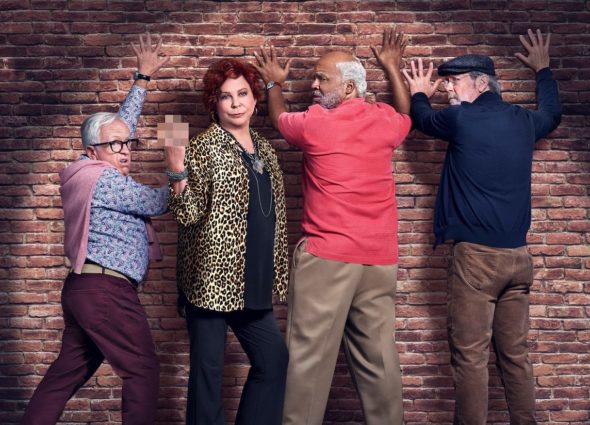 TV show description:
A multi-camera sitcom on FOX, The Cool Kids revolves around a loyal but motley crew who live at a retirement community and will break any rule to have fun.

Hank (Grier) is the leader of a trio of male friends. He’s gruff and opinionated and not completely unlike Archie Bunker. Charlie (Mull) is a bumbling wanderer who constantly goes off on tangents about bizarre episodes from his life. Meanwhile, Sid (Jordan) is a fun-loving but quite melodramatic little guy.

The lives of these guys are complicated when Margaret (Lawrence) forces her way into the group. She’s a brash and confident woman who’s not going to take crap from anyone — especially not these three.

Though they may be old, this quartet is far from done with life. Growing old with dignity is for chumps. The self-proclaimed “cool kids” are determined to make the third act of their lives the craziest and most interesting one yet.

Series Finale:
Episode #22 — The Friend-aversary
Hank, Charlie and Sid prepare their Friend-iversary party, and don’t include Margaret. Noticing the tension between Hank and Sid, Margaret encourages Sid to speak up for himself. Meanwhile, Sid has his sights set on the patio for their party and attempts to convince the cat ladies to release it to them.
First aired: May 10, 2019

What do you think? Do you like The Cool Kids TV show? Do you think it should have been cancelled or renewed for a second season on FOX?

This was the best show I have seen in a long time, so of course the big wigs are not going to give us what we want. We want and need to laugh and this fit the bill. Bring it back

Why do all the really funny shows get cancelled? I loved this show. Bring it back please.

Why in the world did you cancel this show? The show was hilarious! It was funny but with a meaningful message. Apparently you need someone else in charge of your tv shows. We need some laughter in this time.

Bring it back. Refreshing humor, entertaining and whoever made the decision tocancel this is crazy
I would much rather watch cool kids than any of the stupid reality shows . No thank you. Thats as bad as gossip magazines

We really miss Cool Kids. We all watched it in my house and were so upset to see it cancelled. This show was so funny and a brrath of fresh air from all the violence you like to show. Please bring it back! We need good clean comedies anx we need Cool Kids back on! Please! It was my favorite show on tv. Its irritating how you bring garbage shows like the Conners on yet cancel good funny and clean shows like Cool Kids. Please bring Cool Kids back!

You should be cancelled FOX !!!!!!!! BRING BACK COOL KIDS!!!!! First comedy I like in a long time. Glad I brought the series from Amazon!