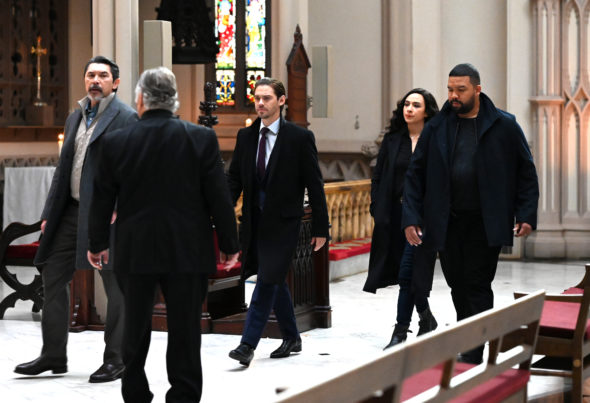 Will Malcolm become closer to his father in the second season of the Prodigal Son TV show on FOX? As we all know, the Nielsen ratings typically play a big role in determining whether a TV show like Prodigal Son is cancelled or renewed for season three. Unfortunately, most of us do not live in Nielsen households. Because many viewers feel frustration when their viewing habits and opinions aren’t considered, we invite you to rate all of the second season episodes of Prodigal Son here.  *Status Update Below.

A FOX crime thriller series, the Prodigal Son TV series stars Tom Payne, Lou Diamond Phillips, Aurora Perrineau, Frank Harts, Keiko Agena, Bellamy Young, Halston Sage, Michael Sheen, and Catherine Zeta-Jones. Season two guest stars include Christian Borle and Michael Potts. In the story, Malcolm Bright (Payne) is an extraordinary criminal psychologist who knows how killers think and how their minds work. In the 1990s, his father, Dr. Martin Whitly (Sheen), was a notorious serial killer called “The Surgeon” who killed at least 23 people. Since murder is “the family business”, Malcolm uses his twisted genius for good, to help the NYPD solve crimes and stop killers. He works alongside his longtime mentor, Gil Arroyo (Phillips), and two detectives — no-nonsense Dani Powell (Perrineau) and JT Tarmel (Harts), a born-and-bred New Yorker who questions whether Bright is a psychopath himself. In season two, Malcolm must deal with the repercussions of the first season finale and his father seeks to deepen his relationship with his prodigal son.

What do you think? Which season two episodes of the Prodigal Son TV series do you rate as wonderful, terrible, or somewhere between? Do you think that Prodigal Son should be cancelled or renewed for a third season on FOX? Don’t forget to vote, and share your thoughts, below.

I call bull**** of Fox tv for cancelling Prodigal Son because of low ratings. That is a lie. Everyone knows that isn’t true. If it was how com so many people sign the petitions? Fox renew Prodigal Son you will be wise to do so.

Please we need Prodigal Son. I need it. I miss Malcolm to make my day Bright. His father has a very funny attitude about stuff. Gil is the nicest person to Malcolm even though he so times gets on Gils nerves.

Keep up the good work prodigals. The petition now has over 66,900 signatures.

Save Prodigal Son. Everyone sign all petitions above saving Prodigal Son tv series. The petition has over 65,320 signatures so far and counting. Thanks to everyone that has signed the petition so far.