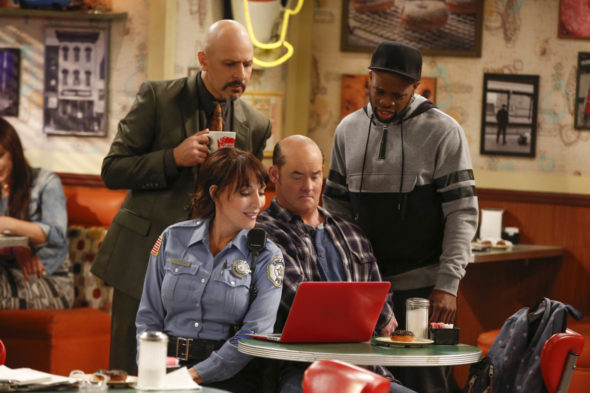 How well does Arthur roll with the changes during the second season of the Superior Donuts TV show on CBS? As we all know, the Nielsen ratings typically play a big role in determining whether a TV show like Superior Donuts is cancelled or renewed for season three. Unfortunately, most of us do not live in Nielsen households. Because many viewers feel frustration when their viewing habits and opinions aren’t considered, we’d like to offer you the chance to rate all the Superior Donuts season two episodes here.

A CBS sitcom, Superior Donuts stars Judd Hirsch, Jermaine Fowler, Katey Sagal, David Koechner, Maz Jobrani, Anna Baryshnikov, Darien Sills-Evans, Rell Battle, and Diane Guerrero. The story centers on an old-school Chicago donut shop owner, Arthur Przybyszewski (Hirsch), who is loath to keep up with the changing times. A young self-starter named Franco (Fowler) convinces Arthur to hire him to bring the shop (and Arthur) kicking and screaming into the 21st Century. In addition to Arthur and Franco, a colorful crew of regular customers keeps things lively at Superior Donuts. In season two, Arthur has to contend with Sophia (Guerrero), an Uptown gentrifier who parks her healthy breakfast food truck in front of his shop.

What do you think? Which season two episodes of the Superior Donuts TV series do you rate as wonderful, terrible, or somewhere between? Should CBS cancel or renew Superior Donuts for a third season? Don’t forget to vote, and share your thoughts, below.

5/12/18 update: Superior Donuts has been cancelled by CBS so there won’t be a third season. Details here.

I’d love to watch reruns of superior donuts. I watched every episode when it was on. Bring them on please!!!

Superior donuts was superior!
Great cast!
Fairly family oriented.
Looked forward to watching every episode!!
Tell them to BRING IT BACK!!

This show is relatable in so many ways. Real life comedy. I hope another season is coming soon.

I think it’s a refreshing show with all the violence on tv today. I like how it talks about real life issues in a humorous and serious way.

This show is awesome as is 9jkl. I just think people don’t like intelligent comedy. Sad. I hope they both get renewed.

Season one was amazing – even with it’s faults (the character of Maya) but season 2 has been straight CRAP. PC, stale nonsense. Never have I seen a cast so WASTED then this mess.

This show is outstanding in the way it addresses real life issues. Things are done tastefully, lovingly and real. This is a show that all different races and genders should sit down and watch together. Without knowing it they make you look at your biases and make you re-think and challenge your stereo types. It is well written and should definitely return for a third season.

Although the show is kind of cheesy at times it both draws attention to the very real issues of gender bias, stereotypes, racism, bullying, poverty, homelessness, politics and how phony politicians are (especially Conservative politics), the struggle for an older person to understand a changing and suddenly different world than the one they grew up in. And the issues are also resolved tastefully and in a realistic manner. I remember when my own father struggled to understand it when males let their hair grow long (including my brothers), females started wearing mini skirts, etc.) He was so lost but was… Read more »