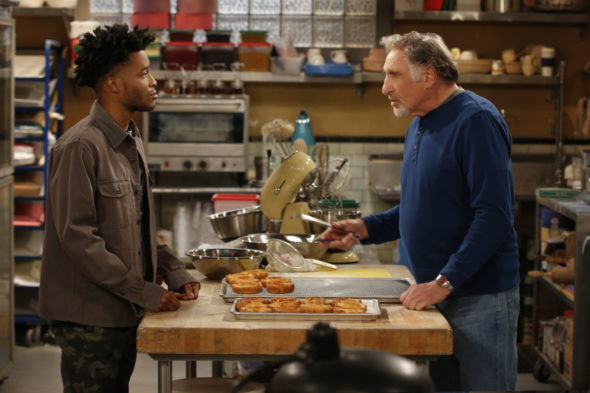 Will Sophia’s food truck sink Arthur’s shop? Is the Superior Donuts TV show cancelled or renewed for a third season on CBS? The television vulture is watching all the latest TV cancellation and renewal news, so this page is the place to track the status of Superior Donuts, season three. Bookmark it, or subscribe for the latest updates. Remember, the television vulture is watching your shows. Are you?

A sitcom airing on the CBS television network, Superior Donuts stars Judd Hirsch, Jermaine Fowler, Katey Sagal, David Koechner, Maz Jobrani, Anna Baryshnikov, Darien Sills-Evans, Rell Battle, and Diane Guerrero. The story centers on an old school Chicago donut shop owner, Arthur Przybyszewski (Hirsch), who is loath to keep up with the changing times. A young self-starter named Franco (Fowler) convinces Arthur to hire him to bring the shop (and Arthur) kicking and screaming into the 21st Century. In addition to Arthur and Franco, a colorful crew of regular customers keeps things lively at Superior Donuts. In season two, Arthur has to contend with Sophia (Guerrero), an Uptown gentrifier who parks her healthy breakfast food truck in front of his shop.

The second season of Superior Donuts averaged a 0.89 rating in the 18-49 demographic and 5.07 million viewers. Compared to season one, that’s down by 24% and 19%, respectively. Find out how Superior Donuts stacks up against the other CBS TV shows.

Will CBS cancel or renew Superior Donuts for season three? It premiered with much lower numbers than last year and subsequent episodes have drawn about the same ratings. I can’t see it being renewed. Honestly though, I can’t figure out why they renewed it for season two, when they cancelled The Great Indoors, which performed much better in the 2016-17 television season. I’ll keep an eye on the Nielsens and update this page with breaking developments. Subscribe for free updates on any Superior Donuts cancellation or renewal news.

*5/12/18 update: Superior Donuts has been cancelled by CBS so there won’t be a third season. Details here.


What do you think? Should CBS have cancelled its Superior Donuts TV series? Would you have watched season three?

I can’t believe! Yet another great sitcom cancelled. That really sucks. Superior donuts was a great show. I really wish they would change their stupid minds and bring the show back. God there is really nothing good left on tv to watch! The networks need to get new people in their office because right now, their are idiots!!!

I hate when all these good shows get cancelled just because not enough periods are watching it and for the people that do watch they are disappointed.

I loved this show. It’s really crappy that all the good shows get canceled and there’s not many good shows left these days. Makes it easier to think about being a cord cutter when the isn’t anything worth watching on.

YES!!!!!! It’s a classy, cerebral show, so shouldn’t be cancelled. Too many people are drawn to the brainless reality, garbage shows. So not surprised.

Absolutely, they SHOULD renew Season 3 for Superior Donuts. It is one of the only reasons that my husband and I pay for CBS All Access.

Three others we have enjoyed “Mom”, The New “Odd Couple”, and one we will REALLY would miss “Me, Myself & I” (a great show).

I wanted to like ‘Superior Donuts’. I’ve been a Judd Hirsch fan since the ‘Taxi’ days, and a Katey Segal fan since ‘Married With Children’, but it just isn’t that funny. Frankly I was surprised it got a second season. I’ll be really shocked it there is a third.

Should be cancelled & replaced by The Odd Couple.