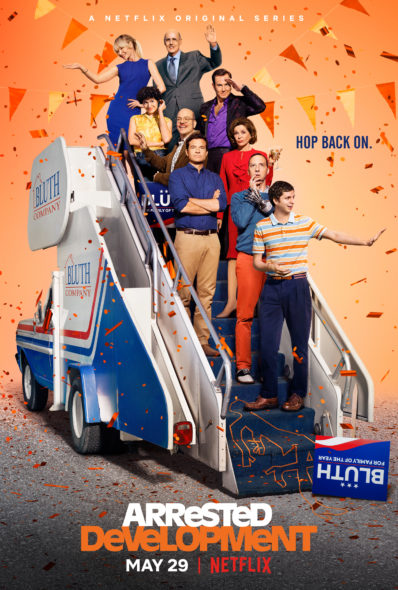 The Bluths are back. Netflix has announced the fifth season of the Arrested Development TV show will drop later this month. The comedy originally debuted in 2003 and ran for three seasons, before being cancelled by FOX in 2006. Netflix revived the series for a fourth season in 2013 and issued a “recut” version, last week. Arrested Development season five premieres on Tuesday, May 29, 2018, as announced on the above poster.

A sitcom, Arrested Development stars Jason Bateman, Michael Cera, Jeffrey Tambor, Jessica Walter, Will Arnett, Tony Hale, Portia de Rossi, David Cross, and Alia Shawkat, with Ron Howard narrating. Check out the new Arrested Development trailer from Netflix. It seems the Bluths are up for a family of the year award — one they’re giving to themselves, of course. You can even vote for them at the link, after the trailer.

In the aftermath of Cinco de Quatro, the Bluth family are all facing one question, that no one quite has the answer to; where is Lucille Two? As this Netflix (semi) original series returns on May 29th, the Bluths are back together, and finally getting the award they think they deserve – for family of the year. A development which will help Lindsay as she begins her campaign for Congress, to become ‘part of the problem’. But whatever happens, Michael will always come back to save the family. Probably. Visit VoteBluth.com for updates from the Bluth for Family of the Year campaign.

What do you think? Will binge-watch or savor the fifth season of the Arrested Development TV series on Netflix?