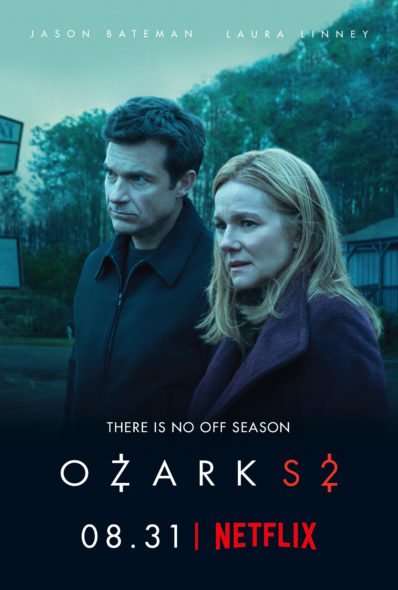 Are fans flocking to the second season of the Ozark TV show on Netflix? As we all know, the Nielsen ratings typically play a big role in determining whether a TV shows like Ozark is cancelled or renewed for season three. Netflix and other streaming platforms, however, collect their own data. If you’ve been watching this TV series, we’d love to know how you feel about the Ozark season two episodes. We invite you to rate them for us. **Status update below.

What do you think? Which season two episodes of the Ozark TV series do you rate as wonderful, terrible, or somewhere between? Should Netflix have cancelled or renewed Ozark for a third season? Don’t forget to vote, and share your thoughts, below.

Love it. Better than Breaking Bad, didn’t think that was possible.
Can’t wait till season 3. I have binged watched 1 & 2 four times!

Addicted to this show. I have binged watched both series 4 times and got 5 other couples to watch.
Cannot wait till season 3. It is better than Breaking Bad. Didn’t think that was possible.

Good show, but can’t even come close to Breaking Bad. Breaking Bad blows this show away!!!

I’ve been delaying watching the last episode of season 2 because it makes me sad to think we have to wait several months for season 3. So I’m going to watch it today and then just start all over with season 1 episode 1. This is a very good series with awesome acting. I agree with Dr. Mack that the lighting could be better.

This series is compelling with adequate script writing and a good cast that moves the narrative along. The two main characters played by Jason Bateman and Laura Linney are well-written, and they carry an improbable, but catchy, storyline quite well. However, I have one major criticism of the series: it is filmed/photographed with inadequate lighting. That’s right, the sets are so dark that it’s difficult to see the characters and scenery at times. Nevertheless, it’s still very watchable. I hope the production team addresses this very uncomfortable situation in the making of season 3.

Could the dismal lighting be an intentional effect?

I just heard of this series, sat down and ended up watching season 1 and season 2 in about a week! All I can think of is this dang series! (sarcasm). I can’t wait for the next season to be out! What kind of twists and turns can it take… however, they did clean up the end so if it were to be cancelled it could, but I really hope not!,

We want more seasons. Great cast, along with fantastic story really made this series special. I am telling every one that I know to watch it. I am very much looking forward to more of this amazing series. Thank you.

Great great show! Acting is wonderful everyone especially Jason Batemsn especially. There has to be a third and more seasons.

Great series! I just wish they wouldn’t drop a whole season at once because it’s so addictive, I binge the whole thing in a day or 2.
Cast, writing, directing, everything is great.

Ozark is so addictive, I love it! It’s well rounded & has a little bit of everything. Keeps me on the edge of my seat wanting more. Not to mention the show has excellent actors giving (in my opion) award worthy performances. The only complaint I have is there isn’t enough episodes in a season. They could at least bump it up to 13 episodes, 9 just doesnt cut it. I truly hope Ozark keeps on streaming for many more seasons to come, even if it is only for 9 episodes at a time. I’ll take all the Jason Bateman… Read more »

I know what you mean about wanting more, but I think that keeping a lower number helps with the quality and keeps us wanting more.

This show is just amazing . As always Jason Bateman doesn’t disappoint. All of the actors in this show are pretty incredible. The story line is just insane! This poor guy is just trying to keep him and his family alive and he gets in deeper and deeper. I watched Season 2 in a few days. Now I have to wait for SEASON 3. one of the best shows out there!