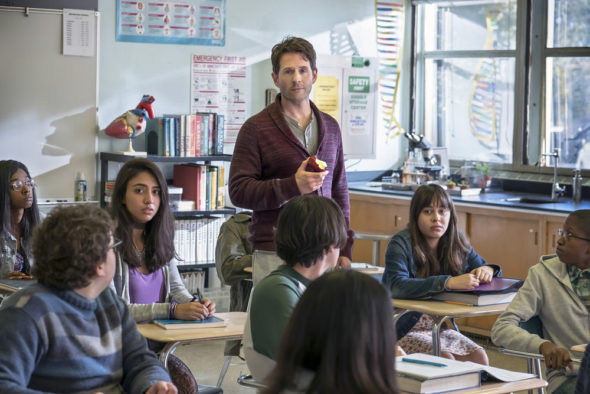 NBC is headed to school. Today, the network announced their new TV show AP Bio will debut in February.

LOS ANGELES (thefutoncritic.com) — NBC will offer a preview of its new comedy “A.P. Bio” on Thursday, February 1 at 9:30/8:30c, a spokesperson confirmed this morning.

The series will then return Thursday, March 1 following the network’s coverage of the Winter Olympic Games, and continue in the post-“Will & Grace” time period.

Additionally, the Peacock has confirmed “This Is Us” will return from its winter hiatus on Tuesday, January 9 at 9:00/8:00c, one week later than previously indicated.

In its place on January 2, NBC will opt for back-to-back episodes of newcomer “Ellen’s Game of Games” starting at 8:00/7:00c.

When disgraced Harvard philosophy scholar Jack Griffin (Glenn Howerton) loses out on his dream job, he is forced to return to Toledo, Ohio, and work as a high school Advanced Placement biology teacher. As he comes crashing in to Whitlock High School, Jack makes it absolutely clear he will not be teaching any biology. Realizing he has a room full of honor roll students at his disposal, Jack decides instead to use the kids for his own benefit. Eager to prove that he is still king of the castle, Principal Durbin (Patton Oswalt) struggles to control the force of nature that is Jack Griffin.

What do you think? Are you a fan of NBC’s comedies? Will you watch AP Bio?