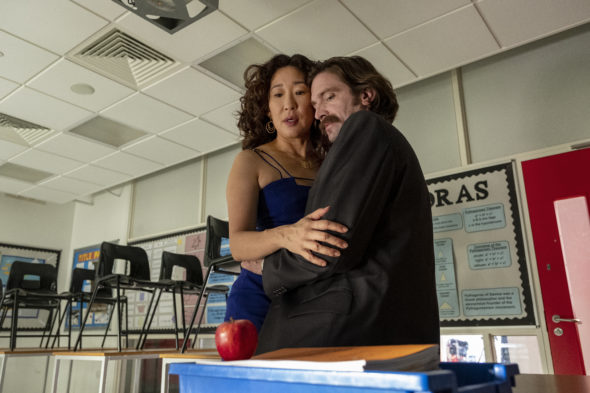 Is the second season of the Killing Eve TV show on BBC America and AMC killing you? As we all know, the Nielsen ratings typically play a big role in determining whether a TV show like Killing Eve is cancelled or renewed for season three. Unfortunately, most of us do not live in Nielsen households. Because many viewers feel frustration when their viewing habits and opinions aren’t considered, we invite you to rate all of the Killing Eve season two episodes for us here. *Status update below.

A BBC America crime thriller, based on Luke Jennings’ Villanelle novel series, Killing Eve stars Sandra Oh, Jodie Comer, Fiona Shaw, Kirby Howell-Baptiste, Kim Bodnia, Sean Delaney, Owen McDonnell, Nina Sosanya, and Edward Bluemel. The story centers on MI6 security officer Eve Polastri (Oh) and capricious killer Villanelle (Comer), who become bound by a mutual act. The second season, which is simulcast on AMC, picks up where the first one left off, and Eve has to find Villanelle before someone else does.

What do you think? Which season two episodes of the Killing Eve TV series do you rate as wonderful, terrible, or somewhere between? Should BBC America and AMC cancel or renew Killing Eve  for a third season? Don’t forget to vote, and share your thoughts, below.

4/8/19 update: Killing Eve has been renewed for a third season.

Season 2 opener was thrilling. Keep it coming. Love this show.