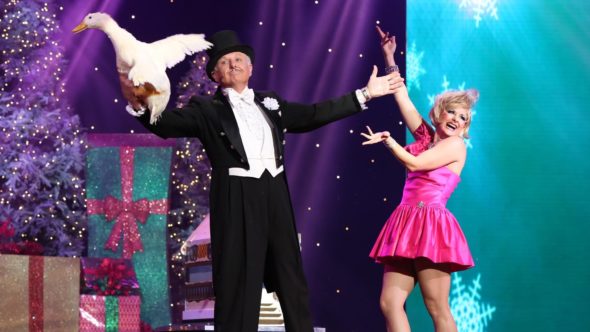 Dean Cain may want to play Superman again but The CW plans to keep him busy elsewhere. The network has renewed the Masters of Illusion TV show for a ninth season for Summer 2019.

A CW stage magic show, Masters of Illusion debuted on Pax TV in 2000 and ran for two seasons before moving to MyNetworkTV for a third year. Cain hosts the series, which features magicians performing escapes, large-scale illusions, and sleight-of-hand tricks in front of a live audience.

The eighth season of Masters of Illusion aired from late June to early October of this year. The 13 installments averaged a 0.19 rating in the 18-49 demographic with 887,000 viewers. The ratings were down about 10% year-to-year and the series was the network’s fifth-highest rated series of the summer.

Today, The CW announced that series Burden of Truth, The Outpost, Penn & Teller: Fool Us, and Whose Line Is It Anyway? will also be returning in Summer 2019.

What do you think? Do you still like the Masters of Illusion TV show? Are you glad that it will be returning for season nine?

Thanks for bringing back Penn and Teller.
We watch them always!!!

Thanks for bringing back masters of illusion and Penn and Teller Fool us.
We watch them both all the time and live them.
Thanks again