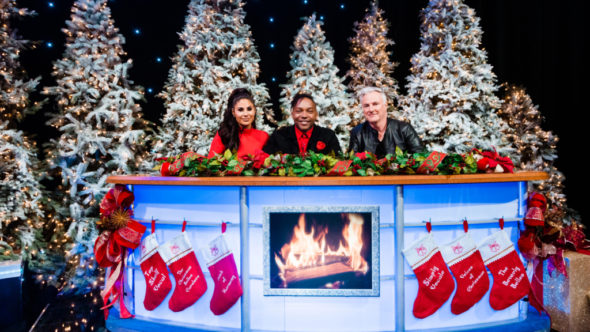 The holidays are just around the corner, and CW has now announced their upcoming holiday specials and shows. This includes a season two renewal of The Christmas Caroler Challenge and special episodes of Masters of Illusion and Penn & Teller: Fool Us.

The CW revealed more about their holiday line-up in a press release.

“The CW Network today announced its slate of upcoming holiday programming, featuring holiday classics, family favorites and all-new specials, including SILENT NIGHT – A SONG FOR THE WORLD, THE HOLLYWOOD CHRISTMAS PARADE GREATEST MOMENTS and HEROES ON THE FRONT LINE.

On Friday, November 27 (8:00-9:00pm ET), the one-hour special GRANDMA GOT RUN OVER BY A REINDEER returns to The CW. Based on the hit song that became a worldwide holiday phenomenon, this goofy and heartwarming adventure features young Jake Spankenheimer on the quest of a lifetime to track his missing Grandma down on Christmas Eve to prove that Santa Claus is indeed real. Michele Lee (Knots Landing) provides the voice of Jake’s greedy Cousin Mel and recording artist Elmo Shropshire provides the narration. An encore presentation of GRANDMA GOT RUN OVER BY A REINDEER will air on Monday, December 21 (8:00-9:00pm ET).

THE HOLLYWOOD CHRISTMAS PARADE GREATEST MOMENTS will air on Friday, December 4, (8:00-10:00pm ET). The special will highlight all the greatest and most special moments of the past parades. The celebration is presented and produced by Associated Television International.

On Wednesday, December 9 (9:00-10:00pm ET), Kevin Frazier (Entertainment Tonight) and Keltie Knight (Entertainment Tonight) return to host GREATEST HOLIDAY COMMERCIALS COUNTDOWN 2020. This holiday special will countdown the 12 best holiday commercials ever – one for each of the 12 days of Christmas. In addition to the top 12, the special features other great commercials from both the U.S. and abroad, that capture the true spirit of the holiday season – from the heartfelt to the hilarious, from the outstanding to the ridiculous. Executive producers are Robert Horowitz and Lewis Fenton and produced by JUMA Entertainment. An encore presentation will air Monday, December 21 (9:00-10:00pm ET).

The all-new SILENT NIGHT – A SONG FOR THE WORLD premieres Thursday, December 10 (8:00-10:00pm ET). SILENT NIGHT – A SONG FOR THE WORLD is a musical film documentary about the creation and cultural impact of the world’s most famous Christmas carol, composed in 1818 in Salzburg. Translated into 140 languages, Silent Night caused a Christmas ceasefire in World War I, while Bing Crosby’s version is the third best-selling single ever. In short: A song for the world! The film tells the story of Silent Night, narrated by Hugh Bonneville, with new recordings by global stars in different languages with a cast including Kelly Clarkson, Joss Stone, John Rhys-Davies, David Foster, Kathrine McPhee, Randy Jackson, Gavin Rossdale, Sheléa, Ailee, Josh Groban, The Vienna Boys Choir, Anggun, Lina Makhoul, The Tenors, Rolando Villazón and many more. The special was created and directed by Award winning director Hannes M. Schalle and produced by Marlene Beran of Moonlake Entertainment. An encore presentation will air Wednesday, December 23 (8:00-10:00pm ET).

The heart-warming holiday event series THE CHRISTMAS CAROLER CHALLENGE returns on Friday, December 11 (8:00-10:00pm ET). Hosted by Dean Cain and Laura McKenzie, the three-episode two hour-long Christmas caroling competition event series features 10 extraordinary Christmas carol groups, each with their own stylized brand of performance, in celebrating the great Christmas music we have all come to love. We’ll meet these groups from the most elaborate ultra-traditional virtuoso performances to those with the most unexpected twists on the classic Christmas carol. Each group which will be judged by three celebrity judges. The event series is produced by Associated Television International.

DOGS OF THE YEAR returns with an all new cast of characters to charm their way into our hearts. Airing Thursday, December 17 (8:00-9:00pm ET), this special counts down the Top 10 dog stories of 2020, celebrating the dogs that go above and beyond, that leave their mark on society, and achieve the nearly impossible. Executive producers are Robert Horowitz, Josh Greenburg and Lewis Fenton. Produced by JUMA Entertainment. An encore presentation of DOGS OF THE YEAR will air Wednesday, December 30 (9:00-10:00pm ET).

The CW will broadcast the holiday special MASTERS OF ILLUSION: CHRISTMAS MAGIC 2019 Sunday, December 20 (8:00-9:00pm ET). This special from Associated Television International and hosted by Dean Cain features some of today’s hottest magicians.

On Tuesday, December 29 (8:00-9:00pm ET), The CW will air POPSTAR’S BEST OF 2020. Presented by Associated Television International and based on polls from Popstar Magazine, host Elizabeth Stanton will count down the greatest and most memorable moments and trends of 2020.

The all-new special HEROES ON THE FRONT LINE airs Wednesday, December 30 (8:00-9:00pm ET). Hosted by Dean Cain and produced by Associated Television International, the one-hour television event celebrates the on-the-ground heroes who dared to make a difference in the midst of the unprecedented and unforeseen worldwide pandemic.

What do you think? Are you excited for more of The Christmas Caroler Challenge and the holiday specials coming to The CW?