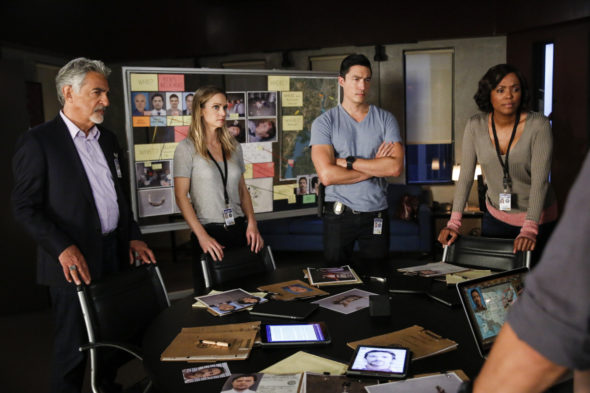 Is it time to board up the BAU? Has the Criminal Minds TV show been cancelled or renewed for a 15th season on CBS? The television vulture is watching all the latest TV cancellation and renewal news, so this page is the place to track the status of Criminal Minds, season 15. Bookmark it, or subscribe for the latest updates. Remember, the television vulture is watching your shows. Are you?

The 14th season of Criminal Minds averaged a 0.76 rating in the 18-49 demographic and 4.67 million viewers. Compared to season 13, that’s down by 23% and 19%, respectively. Find out how Criminal Minds stacks up against the other CBS TV shows.

Will CBS cancel or renew Criminal Minds for season 15? Thus far, CBS has only ordered 15 episodes for this year, but that could change. If the network does want a 15th season though, the studio will have to make new deals with the cast, which means higher costs. Right now, I think it is likely to end, so I’ll keep an eye on the ratings and update this page with breaking developments. Subscribe for Criminal Minds cancellation or renewal news alerts.

What do you think? Should the Criminal Minds TV show be cancelled or renewed for a 15th season? Are there more stories to tell, or is this a good place to end the series?

This is one of the best shows on cbs. If they keep removing good shows, I guess I will not watch this channel anymore.

Thank you for the information. I love the show and hope it stays.

Thank you so much for the information.

Please don”t end the show. I and my husband watch the show since day one. Great cast all the way around. Hate to see it end.

I’ll be sad to see it end. I enjoy that show. Even the reruns. Don’t end it!!

I really like the show and am sad to see it come to an end. When are they going to air the 15th season I’ve been waiting for it. I don’t like it when shows end on a clifhanger.

Will miss the show and great cast.

I’m sad that is coming to an end . Really love the show and all the actors .

When is season 15 going to start? I watch ALL reruns waiting for the new season to start. I love this show & need more !You should never cancel this show…it’s the BEST

Love the show it needs to be renewed. To many side stories to be told about the other cast members