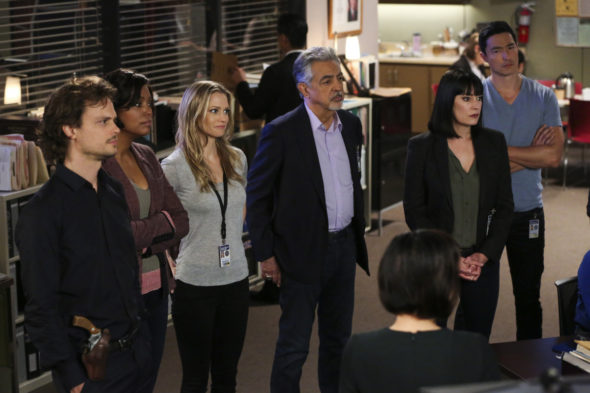 Human behavior can be difficult to predict — just ask the BAU. The Criminal Minds TV show has enjoyed a 13-season run on CBS and was renewed for a 14th season last week, despite declining Nielsen ratings. There has been speculation that season 14 would get a reduced episode order, designed to give the procedural a proper sendoff. Today at the Upfronts, the network revealed its new schedule, and season 14 will premiere in the fall of 2018, which indicates it could get a full season order, after all. It is certainly positioned for one.

At CBS’ upfront press breakfast, the network’s entertainment president Kelly Kahl said that the exact order size for Criminal Minds has not been determined. (It is expected to be somewhere between 13-22 episodes.)

Will Season 14 be Criminal Minds‘ last? “Never say never with a show like Criminal Minds,” Kahl told Deadline, noting that the crime drama has “a very passionate audience.”

While the core cast of Criminal Minds is already locked in for next season, they will have to make new deals for a potential fifteenth season.

After a long run at 9 PM, Criminal Minds moved to 10 PM this season. It has improved the time period and is doing well in delayed viewing. The crime drama ended its 13th season on a cliffhanger. It will now be resolved in the Season 14 premiere, which will mark the show’s 300th episode.

Criminal Minds: A Look at the Ratings

The 13th season of Criminal Minds averaged a 0.99 rating in the 18-49 demographic and 5.73 million viewers. Compared to season 12, it was down by 29% and down by 23%, respectively. Find out how Criminal Minds stacks up against the other CBS TV shows.

Ratings usually decline over the life of a TV show. That’s nothing new. Criminal Minds, however, has dealt with some additional challenges in the recent past. Fan favorite Shemar Moore left to pursue other opportunities (although he guest starred in season 13) and wound up co-starring in the Tiffany Network’s SWAT reboot.

In addition to the loss of Moore, series original Thomas Gibson, who portrayed Aaron Hotchner, was fired early on, in the production of season 12. His terminated resulted from an on-set confrontation which allegedly turned physical. Fans were upset by both departures, which likely affected Criminal Minds‘ Nielsen performance.

What do you think? Are you still watching the Criminal Minds TV series? Do you plan to tune in for the 14th season on CBS? Should that end the series, or are there more stories to tell? Would you cancel or renew Criminal Minds for season 15?

I only watch until Hotch is there. No matter what happened Hotch as a character received a proper goodbye instead of being written off. I hope they bring back all the important people who contributed to criminal minds at least on the last episode if not before other wise I don’t see this series go this far.

i stopped watching this show when Shemar Moore left the show, but I still watch the reruns on netflix up until he leaves but nothing after that.

Criminal Minds is one of my favorites and although I hated to see Shemar Moore leave I am still very loyal to the other members of the cast. I am sure I am not alone saying I hope it never goes away.

I love Criminal Minds!! Keep it going! Excellent cast, plot lines. I could watch it for 15 more years.

Please do not cancel Criminal Minds as it is still my favorite TV series after 13 seasons.