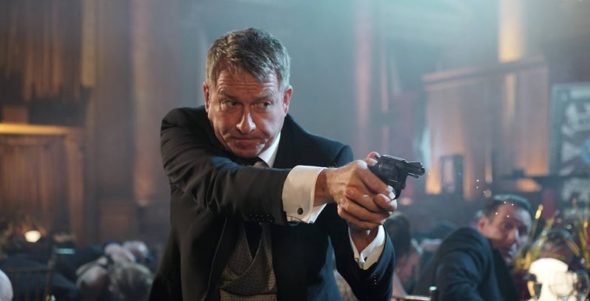 A Batman prequel series, FOX’s Gotham is ending with its fifth season. However, EPIX plans to go even further back in time with their own prequel series. The cable channel has ordered the new Pennyworth TV show for 2019. The 10 episode, live-action series will delve into the history of Alfred Pennyworth, Bruce Wayne’s longtime friend and loyal butler.

The ten-episode, one-hour drama series is based on DC characters created by Bob Kane with Bill Finger. It follows Bruce Wayne’s legendary butler, Alfred Pennyworth, a former British SAS soldier who forms a security company and goes to work with Thomas Wayne, Bruce’s billionaire father, in 1960’s London. Production will begin later this year, with a series premiere slated for 2019.

Said Michael Wright, President, EPIX, “As genuine fans of these classic DC characters, as well as the incredibly talented Bruno Heller and Danny Cannon, we couldn’t be more excited to make EPIX the home of this series. We can’t wait to work with Bruno and Danny – along with Peter Roth, Susan Rovner, Brett Paul and the team at Warner Horizon – on this fantastic origin story.”

Bruno Heller and Danny Cannon said, “Michael and his colleagues have created the perfect venue for original storytelling, and all of us working on PENNYWORTH are thrilled to be on the EPIX slate.”

PENNYWORTH comes on the heels of EPIX’s recent pick up of ABC Signature Studios’ drama series GODFATHER OF HARLEM, starring and executive produced by Oscar® winner Forest Whitaker, with Chris Brancato and Paul Eckstein (Narcos) serving as showrunners. Both series are part of a growing slate of EPIX originals, which includes the upcoming season two premiere of the critically-acclaimed dark comedy GET SHORTY, from MGM Television, this summer.

ABOUT WARNER HORIZON SCRIPTED TELEVISION
A division of the Warner Bros. Television Group, Warner Horizon Scripted Television was founded in 2006 and is one of the entertainment industry’s leading producers of dramatic and comedic programming for the cable and subscription/on-demand marketplace. Series produced by Warner Horizon Scripted Television include Animal Kingdom and Claws for TNT; People of Earth for TBS; American Woman for Paramount Network; Famous in Love for Freeform; Fuller House for Netflix; Krypton for SYFY; Love Is___, Queen Sugar and the Untitled Tarell Alvin McCraney Project for OWN; Pennyworth for EPIX; and You for Lifetime.

ABOUT EPIX
EPIX, an MGM company, is a premium pay television network, delivering the latest movie releases and biggest classic film franchises, plus original programming including series, documentaries, and comedy specials – all available on TV, on demand, online and across devices. Launched in October 2009, EPIX became profitable in its first year of existence and is now available nationwide to 70 million homes through cable, telco, satellite and emerging digital distribution platforms. A pioneer in the development and proliferation of “TV Everywhere,” EPIX was the first premium network to provide multi-platform access to its content online at EPIX.com and to launch on Xbox, PlayStation®, Android phones and tablets, and Roku® players. EPIX is also available across hundreds of consumer devices including Apple TV, iPhone and iPad, Amazon Fire TV, TiVo, Chromecast, and Android TV, delivering more movies than any other network with thousands of titles available for streaming. For more information about EPIX, go to www.EPIX.com. Follow EPIX on Twitter @EpixHd (http://www.twitter.com/EpixHD) and on Facebook (http://www.facebook.com/EPIX), YouTube (http://youtube.com/EPIX), Instagram (http://instagram.com/EPIX) and Snapchat @EPIXTV.

What do you think? Do you plan to check out the Pennyworth TV show?

Whilst Gotham had no interest for me, this has a very different feel to it and definitely worth exploring such a well liked character.