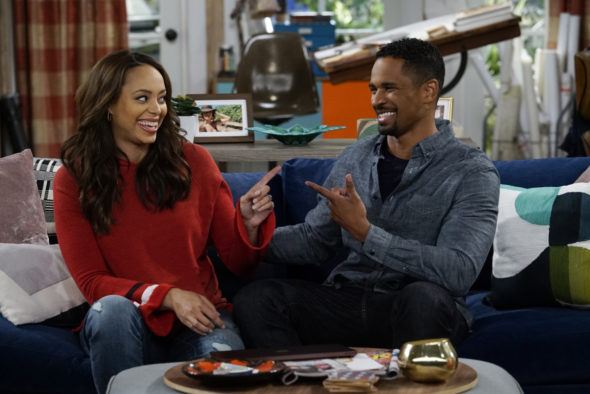 How are things working out with Jake, Claire, and Cooper during the first season of the Happy Together TV show on CBS? As we all know, the Nielsen ratings typically play a big role in determining whether a TV show like Happy Together is cancelled or renewed for season two. Unfortunately, most of us do not live in Nielsen households. Because many viewers feel frustration when their viewing habits and opinions aren’t considered, we’d like to offer you the chance to rate all of the Happy Together season one episodes here. **Status update below.

A CBS sitcom, Happy Together stars Damon Wayans, Jr., Amber Stevens West, Felix Mallard, Stephnie Weir, Victor Williams, and Chris Parnell. The comedy centers on Jake (Wayans) and Claire (West) a happily married couple in their 30s. Just as they’re starting to get a little staid, Jake’s client, pop superstar Cooper James (Mallard), moves in with them and helps them to connect with the younger, cooler people they used to be.

What do you think? Which season one episodes of the Happy Together TV series do you rate as wonderful, terrible, or somewhere between? Should CBS have cancelled or renewed Happy Together for a second season? Don’t forget to vote, and share your thoughts, below.

They need to renew this show. So much crap gets renewed every year, and so many good shows cancelled. This is a truly funny cast and I can’t wait to see what happens next with a baby on the way.

Stop cancelling good shows. We finally have one of the talented Wayans come back on the screen and you want to take him away? Enough with this neilsen nonsense! Ask us! We watch the TV.

I love this show please renew it. I can’t stop laughing each week. Adding a baby with these too would be hilarious

RENEW for many more seasons!!!!!! Love the cast and and the show need to bring back D’s dad back to see how he is doing from his break down and then bring his (real life mom) mom on too that would be awesome just to see how they react to each other after her getting remarried and the great news of them getting pregnant and her parents not drinking any more and the tour it getting exciting…. The shows about to get more and more better!!!!

I really thought this was one of the best new shows this season. I can’t even fathom that it wasn’t picked up for a different time slot. The only reason this would fail is poor planning on the part of execs. It’s a really good show, it just needs to be given a chance to shine!

CBS you will be making a terrible mistake if you cancel this show! It is hilarious!

Love this show. Please don’t cancel. My husband and I love watching happy together every week. The cast is great.

Please keep happy together series. It’s funny and light hearted with great acting. I’m 55 years old and the dhow actually appeals to me.

D-Dub J…Damon Wayans Jr…is so funny! Also love Claire and her parents! OMG those hilarious parents! Deacon was my fave character on King of Queens, and he shines so bright in this show!

What cute show.i love it; better then Kevin can wait!