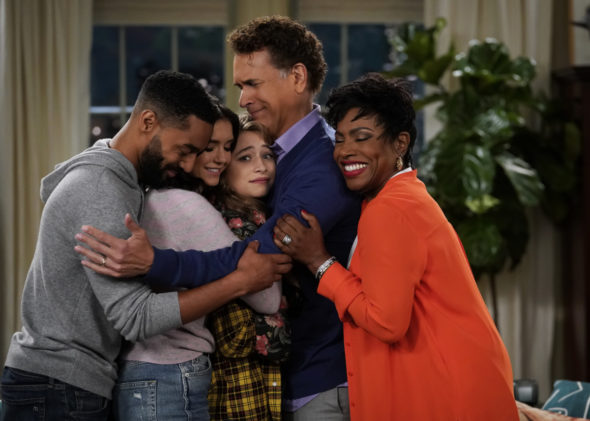 TV show description:
From creator Corinne Kingsbury, the Fam TV show is a sitcom that centers on a young woman named Clem (Dobrev). Although she grew up in a family which left a lot to be desired, today, Clem is living her best life, with a chosen family of people whom she loves and who return the feeling.

Clem’s fiancé, Nick (Bell), showers her with adoration and comes from a stable, “well-to-do” family. Between Nick, his job as a college professor, his family, and Clem’s wonderful job and great apartment, life is going better than she would have once dreamed. Then one day, her out-of-control half-sister, Shannon (Adlon), turns up at her door.

Shannon really needs to put some space between herself and their father. Clem and Nick realize they can help Shannon avoid some of the mistakes Clem made in her youth, so they invite her to move in with them. Now Clem’s two families need to become one, and if they can pull it off, they might just find a happy ending for everyone.

Series Finale:
Episode #13, “This Is Fam”
Clem’s father surprises her with video left by her deceased mother for her wedding day. Also, Clem and Nick run into trouble getting their marriage license the day before their wedding.
First aired: April 11, 2019

What do you think? Do you like the Fam TV series? Should this CBS TV show have been cancelled or renewed for season two?

I really looked forward to Thursday night’s ! It was always funny! I think it should come back for a second season.

I loved the show. It was light and airy and the sister was amazingly funny. I loved the cast. I was watching it on CBS go, and then it was gone even before I got to finish the season. Please bring it back.

I don’t feel like it met its potential. I didn’t look forward to seeing it every week & didn’t miss it.

I liked the show. Definitely deserved a 2nd season

The show was good , which could be better in season two ! But of coarse it gets canceled to soon because producers and CBS aren’t making billions! Well now CBS lost another viewer permanently

Why cancel another good sitcom. It’s cute and good laughs

Say it ain’t so.Loved that show!!!

I loved this show. All the characters were so uniquely special. Good laughs and great relationship lessons. I’m so disappointed I guess we will never see them marry. I looked forward to it each week and was expecting it to return in the fall. Please reconsider.