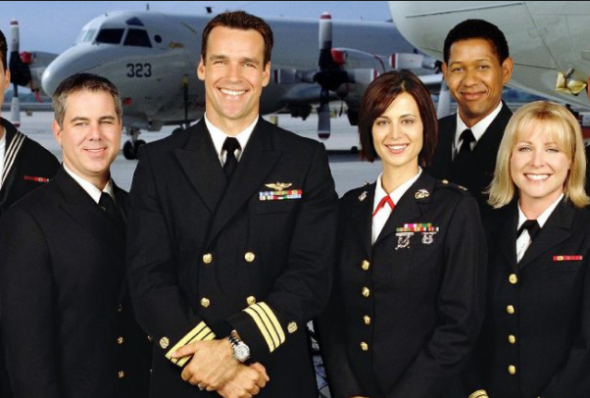 JAG fans might be in luck. Recently, NCIS: Los Angeles showrunner R. Scott Gemmill told TVLine there may be a JAG/NCIS crossover in the works.

A legal drama, JAG followed a group of judge advocates as they prosecute and defend cases within the military. The cast included David James Elliott, Catherine Bell, Tracey Needham, Patrick Labyorteaux, John M. Jackson, and Scott Lawrence. The series ran on NBC from 1995 to 1996 before switching to CBS from 1997 to 2005.

Given that NCIS is a spin-off of JAG, it would make sense to have a crossover. However, NCIS is 15 seasons in and that still hasn’t happened. Will it ever? NCIS: Los Angeles showrunner R. Scott Gemill says there’s still hope for a JAG reunion:

That still is a goal of mine, to get as many of the original JAG players back in an episode. I have such fun when John’s here, it’d be great to put them all together again. I think the fans would really dig that.”

JAG star Catherine Bell is on board for the crossover as well, telling TVLine:

We’ve talked about it forever. I would love to put on my old uniform and show up on NCIS. That would be really fun.”

What do you think? Did you watch JAG? Would you like a crossover with NCIs?

I would LOVE to see a reboot of Jag!! What would be even better is more than one episode. My son got me into watching all the old episodes & it’s hard to believe such a good show ended!

OMG!! Yes I would!! I love watching JAG on dvd. So it would be great to see the gang all together again!

Would love to see more JAG .

I can’t get enough of the reruns of Jag. A comeback would be great. Bring it on!!!

I would like to see JAG come baCK JAG WAS A GREAT PROGRAM.

I too would love to see JAG come back. JAG/NCIS combo would be very exciting.