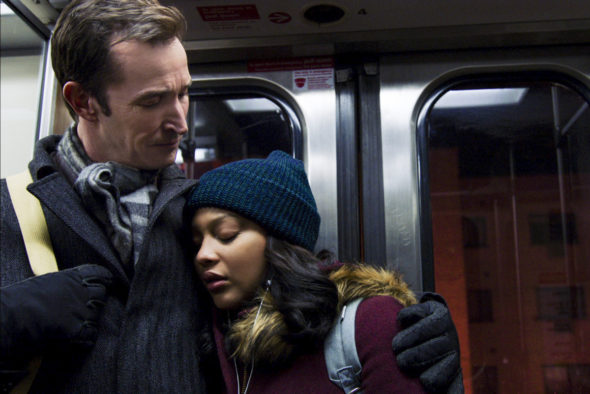 TV show description:
From creators Caitlin Parrish and Erica Weiss, The Red Line TV show is a limited series which centers on three separate Chicago families forever changed by the shooting of an unarmed African American doctor. Drawing upon life in three distinct neighborhoods, the story looks at how race, culture, and circumstance affect experience.

High history school teacher Daniel Calder (Wyle) and his husband, Dr. Harrison Brennan (Reynolds), are raising teen daughter Jira Calder-Brennan (Royale) on Chicago’s north side, when Dr. Brennan is wrongfully shot and killed by a while police officer. Although Daniel does his best to comfort Jira, she needs the support and understanding of a black woman who can better empathize with what life is like for her.

Tension between father and daughter grows, when Jira decides to seek out her birth mother in hopes that she can provide some answers about her family history and context for her identity as an African American woman. Daniel, meanwhile, seeks solace from co-worker Liam Bhatt (Chhibber), who also happens to be Jira’s literature teacher.

On the south side of Chicago, Jira’s biological mother, Tia Young (Corinealdi), lives with husband Ethan (Charles), a red line train operator. In the wake of the shooting, Tia is contemplating a run for Alderman, but fears connecting with Jira could wind up scuttling her political aspirations. Although he is a loving father to their six-year-old son and knows his wife, as a teen, gave up a baby for adoption, Ethan cautions Tia against it.

Finally, on the city’s west side, officer Paul Evans (Fisher) is dealing with the aftermath of having shot an innocent man and has to come to terms with not just the tragedy, but also his mindset. Paul’s professional partner, Victoria “Vic” Renna (Laidlaw), and his brother, Jim (Thornton), do more harm than good, when they try to help him. Jim is a former officer himself and has been confined to a wheelchair since he was shot on the job.

The drama uses the stories of the Calder-Harrison, Young, and Evans families to explore the racial and racist issues inherent in our culture. Through these characters, it delves into how backgrounds, subconscious biases, and perspectives influence our choices, while also affirming the need for basic human dignity.

Series Finale:
Episode #8 — This Victory Alone Is Not The Change We Seek
Tia receives a financial windfall from an unlikely source, putting her back in the race for alderman against Nathan Gordon. Also, Paul makes a profound and life-changing revelation about himself.
First aired: May 19, 2019.

What do you think? Do you like The Red Line TV series? Should this CBS TV show have been cancelled or renewed for a second season?

I would watch it if it came on again

please bring it back on! really liked that show!!!

The Red Line was a fantastic series and I loved it. It should be continued.

I enjoyed the show very much and hoped it would be renewed.

Loved the show. Would love another season

My husband and I both love this show “The Red Line” !!! We both are hoping it comes back for many more episodes!!!

Loved the show! Bring it back!