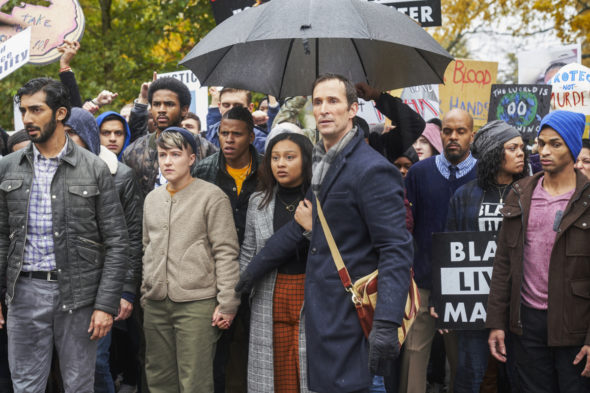 What’s right and what’s wrong during the first season of The Red Line TV show on CBS? As we all know, the Nielsen ratings typically play a big role in determining whether a TV show like The Red Line is cancelled or renewed for season two. Unfortunately, most of us do not live in Nielsen households. Because many viewers feel frustration when their viewing habits and opinions aren’t considered, we’d like to offer you the chance to rate all of The Red Line season one episodes here. *Status update below.

What do you think? Which season one episodes of The Red Line TV series do you rate as wonderful, terrible, or somewhere between? Should CBS cancel or renew The Red Line for a second season? Don’t forget to vote, and share your thoughts, below.

*6/7/19 update: It’s been confiirmed that there won’t be a second season for The Red Line TV show on CBS.

IT IS A REAL SHAME For A Network like CBS To Withdraw Support Of Today’s Life and Time Event’s by CANCELING TV Series such as THE RED LINE With It’s COMPASSION and REALISM. It is TRUELY A SHAME To Take Away and show Non-Support for Our Current Changes In Our Society 2Day!

LOVE THIS SHOW I HOPE THEY MAKE A SEASON 2 ..IM ALREADY READY FOR IT . They r amazing people , actors, and this is like life what is really going on out there I love it .bring it back

This is an amazing show… my favorite that I cannot wait to see each week. The acting is incredible as is the storyline! Please renew it!

This show NEEDS to continue. There are so many issues that need to be address. PLEASE BRING IT BACK!

Cancel The Red Line on CBS……..The program does not deserve a second season. Totally tedious!

You are sooooo wring!$

Love this drama series. The acting is outstanding, the script edgy and the show’s premise is on point. Only think I don’t like is the music, which at times gets in the way of an important scene. When the actors are talking quietly, the music can make it harder to understand what’s happening. This seemed particularly true in episodes 5 and 6. Music in the right spots can enhance the scenes, but in at least 2 scenes on Sunday I found myself wanting to turn down the volume of the music so I could hear what was being said. Except… Read more »

I agree with you. The music is especially loud on commercials. I find myself turning the tv down and then up and just back and forth.

I agree. Please tone down the music. The show is great and has a great storyline which could be happening in any city.

This is so new and different I hope it will continue to a season 2. The weaving of lives and dealing with issues rarely addressed in a series is just what is needed in a TV series. This IS Chicago.

The acting was excellent. The premise is questionable. With 141 homicides to date in Chicago with over 90% being Blacks shooting Blacks I think the focus should not be on educating the police, but rather the Black community. I know it is more dramatic when a WHITE COP shoots an unarmed Black doctor, but the odds of a Black person shooting another Black are far greater and occur far more often.
Get your s–t together and have courage to tell the truth and offer some solutions.
Jay Weiss