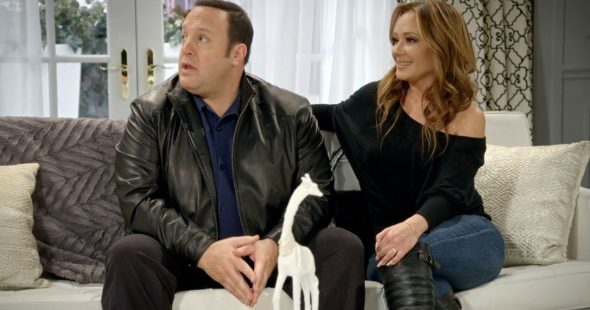 As reported earlier, the new season will take place after the death of Donna Gable (Erinn Hayes). After season one, Hayes was fired from the comedy and will be replaced by Leah Remini. The cast also includes Kevin James, Mary-Charles Jones, James DiGiacomo, Taylor Spreitler, Ryan Cartwright, Leonard Earl Howze, Gary Valentine, and Lenny Venito.

Check out a synopsis of the season two premiere and a photo below:

“Civil Ceremony” – Kendra and Chale must get married immediately when the Gables learn that he is about to be deported. As Kevin chases down Father Phillip (Jim Breuer) to officiate the ceremony, Vanessa helps Kendra put together the last-minute affair, on the second season premiere of KEVIN CAN WAIT, Monday, Sept. 25 (9:00-9:30 PM, ET/PT) on the CBS Television Network. Leah Remini joins the cast as Vanessa Cellucci, and Jim Breuer returns as Father Phillip. 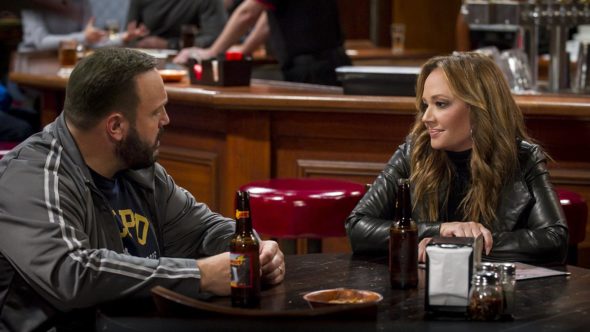 What do you think? Are you a fan of Kevin Can Wait? Are you excited for the new season?

wont be watching season 2…didn’t have to get rid of his wife, she played a really good character and I love leah also but it would have been better to keep both…not watching anymore, bad move

I am so VERY looking forward to Leah and Kevin back together again! It always felt that Kevin was cheating on Leah with his new wife. Kevin and Leah have such great comedic chemistry! I’ll be glued to my TV every week! Can’t wait!

Can’t wait till this becomes another kings and queens. It’s what we need right now….NOT!!! I think it was really piss-poor of these people to get rid of someone who help make the show what it was. Now all we’ll get is more screaming and arguing!! and less of the kids..just watch

Why don’t they just recst Chale as a black man and get Victor Williams to portray him, recast Kendra with Nicole Sullivan, recast the young son with Patton Oswalt, and introduce Jerry Stiller as Kevin’s REAL father. That sounds about right, right?

Honestly like Leah Remini, but how can a good person be comfortable with this entire situation? If Erinn Hayes was a bad actress or bad comedic actress, it might be justifiable. I know Kevin is close with Adam Sandler, but mirroring his Happy Madison clique environment really doesn’t look good on him.

My husband & I were fans during Season 1. We became invested in the characters & the entire family dynamic.
A lighthearted & sweet show to help unwind after a long Monday. Killing off the warm & funny wife/mother is a complete disgrace! Will NOT be watching Season 2!

No matter, I won’t be watching. I was not a King of Queens fan, so I only watched because this was different. With Leah Remini back, it won’t be different any more. Frees up a half hour for me every week!

I WAS a fan of Kevin Can Wait…gradually became invested in this entire family. Killing off the warm, funny, & caring wife/mother is so very wrong! Feels as if someone pulled the rug out from under. Will NOT be watching Season 2.

i dont like the changes being made , i wont be watching it

I loved the show and Leah Remini is gorgeous but it was a dick move to fire Erinn Hayes! I will not be watching Season 2 because of this! You jerks cancel great shows and fire actors/actresses on a whim. Maybe CBS means Constant Bull Sh#t!!!!!!

Wow. What a stupid and cruel premise.

I will not be watching season 2. I liked the wife. I hated King of Queens

I’m not watching this season. I hope the ratings are affected negatively with the firing of Erin Hayes. They could have kept her on, and had Kevin wanting a divorce, and Erin being a single mom…something other than firing her. If they wanted King of Queens, that’s what they should have brought back in the first place, not this new show.

Heck yeah, bring it on!

I think it was cruel to fire the actress who portrayed Kevin’s Wife on this show. I liked them on King of Queens but this was so unfair and to me stupid!!! It was all for ratings does no one else see this?

I absolutely agree with you 100%. I thought it was very cruel to fire her.
Yes, they were fun on King Of Queens but I don’t agree with how this was handled and will not be watching the series.

Everything a TV show does is for ratings. I didn’t like it either, but I read where fans were petitioning for Leah to replace Erinn at the end of season 1. I’ll watch to see how they handle it, and hopefully will continue to enjoy the show.

lol I don’t believe it. All last year no info of wanted her fired by the viewers. All that was saying she was too go looking for him….good grief get the story right I heard Kermit the frog was petition by the viewers to replace Kevin …… that believeable