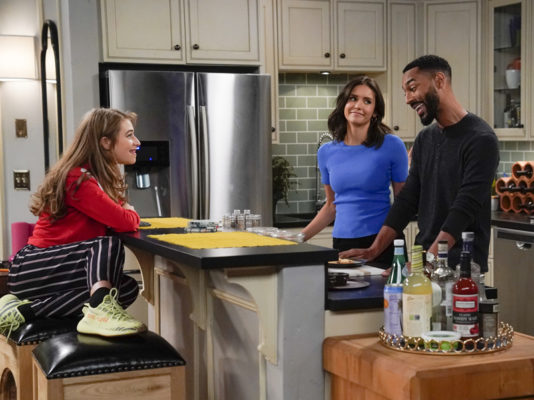 Fam will debut on Thursday, January 10th at 9:30 PM and will take over the timeslot once Murphy Brown has finished for the season. Man with a Plan will return on Monday, February 4th at 8:30 PM, replacing Happy Together on the schedule. Murphy Brown’s season was set at 13 episodes and the network opted not to order additional installments of Happy Together.

The CBS press release notes that a premiere date for the fourth season of Life in Pieces will be announced at a later date. The network renewed the family comedy for a new season of 13 episodes back in May.

CBS today announced the comedy portion of its winter 2019 scheduling moves, including the series premiere of FAM and the return of MAN WITH A PLAN.

CBS will premiere the new comedy FAM on Thursday, Jan. 10 (9:30-10:00 PM, ET/PT) after MURPHY BROWN completes its season order. FAM stars Nina Dobrev and Tone Bell in a comedy about a woman whose vision of a perfect life with her adoring fiancé and his wonderful parents is radically altered when her 16-year-old, out-of-control half-sister unexpectedly comes to live with her. As the family Clem (Dobrev) chose and the family she has blend, Clem realizes that this new happy fam may be the perfection she’s always been seeking. Odessa Adlon, Brian Stokes Mitchell and Sheryl Lee Ralph also star.

The season premiere of LIFE IN PIECES will be announced at a later date.

What do you think? Will you be watching the premieres of Fam or Man with a Plan on CBS? Are you looking forward to the future return of Life in Pieces?

I love Life in Pieces! The cast is hilarious! Can’t wait till it comes back on!

Bring back Life in Pieces! It’s the best comedy on t.v.

I am really missing Life in Pieces! It’s so funny and smart. Please replace Fam; predictable and flat.

I Love FAM why does it need replaced? It hasn’t even had time to form opinions or for people to get interested in it !!! It’s a great show with lots of different ways to play scenes out !! Don’t be so fast yo throw it under the bus !!! LIFE IN PIECES is awesome and there’s room on the schedule for FAM and it !!!!

I want life in pieces back! My favorite show!!!!!!

Please bring back life in pieces! Get rid of some of the other crap you have on. Otherwise Hallmark will be getting all of our time.

It’s been renewed!!! Does anyone actually read the releases / articles ?? It’s stating no date set yet which most likely means it will be SPRING /SUMMER 2019 line up !!!!

Life in Pieces can’t start soon enough! I wish they would make the episodes an hour long.

I agree. I LOVE Life in Pieces.

Won’t watch new comedy sitcom “Fam” because I don’t know any actors in it! Where is Life in Pieces? Loved that Show!

Well that’s kind of stupid. !! So any new show with new actors don’t stand a chance !!! YOU DONT NEED TO THROW FAM UNDER THE BUS because you want LIFE IN PIECES …. It’s been renewed for months,, just waiting on RELEASE !!! If they listen to your reasons we will never get any shows !!! Take it off cause you don’t know anyone lol‍♀️‍♀️‍♀️‍♀️‍♀️

Been waiting for “Life In Pieces”. There’s so much you can do with skits, over 3 generations. Think of the Carol Burnett Show and how long that aired for, plus the spinoffs!

Life In Pieces is the best sit-com on tv and I wish it was a full hour! Why is it not on the air yet???

It’s been renewed for months !!! Guess they are gonna add it to the Spring/Summer 2019 Line up

Life in Pieces best sitcom out there.