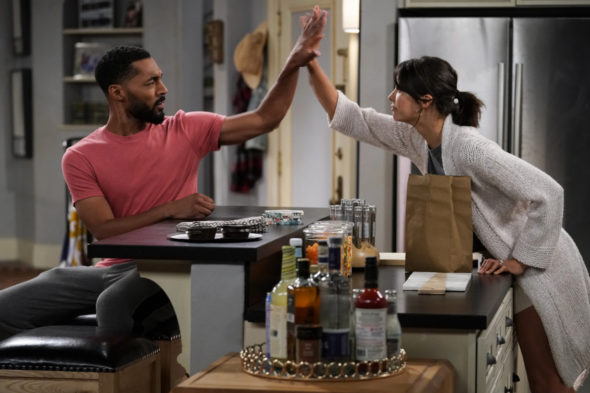 How well do Clem and Nick adapt to having Shannon live with them, during the first season of the Fam TV show on CBS? As we all know, the Nielsen ratings typically play a big role in determining whether a TV show like Fam is cancelled or renewed for season two. Unfortunately, most of us do not live in Nielsen households. Because many viewers feel frustration when their viewing habits and opinions aren’t considered, we’d like to offer you the chance to rate all of the Fam season one episodes here. **Status update below.

A CBS family sitcom, Fam stars Nina Dobrev, Tone Bell, Odessa Adlon, Sheryl Lee Ralph, and Brian Stokes Mitchell. It centers on Clem (Dobrev), who overcame a rough start and is now living her best life with fiancé Nick (Bell) and his wonderful family. When her younger half-sister, Shannon (Adlon), shows up, in need of respite from their dad, Clem and Nick take her in, with the hopes of teaching her how to avoid the pitfalls which once tripped up Clem.

What do you think? Which season one episodes of the Fam TV series do you rate as wonderful, terrible, or somewhere between? Should CBS have  cancelled or renewed Fam for a second season? Don’t forget to vote, and share your thoughts, below.

This show is awesome , I love it so much , I really want there to be a second season !!!!

This show is cute and funny, I think Nina is adorable as Clem and the younger sister is great. I agree more of Gary Cole and why not bring in more guest stars as other wacky family members, since the show is called FAM. There are a lot of opportunities for comedy with this show, I hope they do even more with it in season 2.