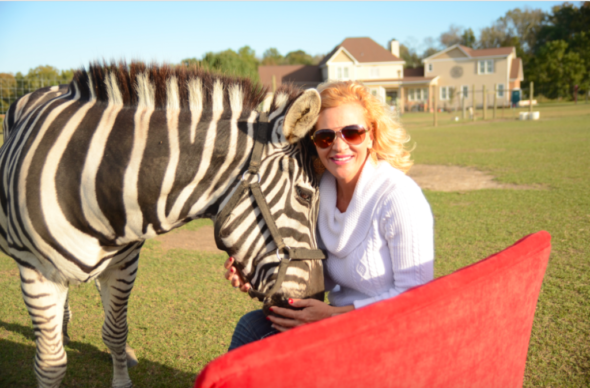 TLC is getting wild. Recently, the network announced their new TV show Our Wild Life will premiere later this month.

The docuseries “follows heads of the household, Bobbie Jo and Jerry Abrams – who like to say they have 86 children, 81 of them, animals! – as they live their eventful, day-to-day lives.”

(Silver Spring, MD) – As the primary destination for going inside the homes of genuine and remarkable families, TLC presents the new series OUR WILD LIFE, which offers a unique look into an extremely unconventional clan: a blended family of humans and wild creatures! Premiering Tuesday, May 22 at 10/9c, the show follows heads of the household, Bobbie Jo and Jerry Abrams – who like to say they have 86 children, 81 of them, animals! – as they live their eventful, day-to-day lives. In each of the six, one-hour episodes this season, viewers can expect a ton of wild moments.

With 16 acres of land at their fingertips, the Abrams family has adopted and nurtured these loveable creatures, allowing many of them to reside inside their house, regardless of the craziness. To them, each animal is like a new brother or sister, with animal siblings including a zebra, camel and lemur, as well as kangaroos, alpacas, llamas, wallabies, pigs and more. Several of the Abrams’ animals are rescues or have special needs, and the family has devoted the household to providing the love and care they deserve. In addition to their “fur babies,” the Abrams’ extended family includes their nanny, Naa Naa, who also has been a staple in this lively home for seven years.

In the premiere episode, Bobbie Jo’s daughter, Hali, brings home a new umbrella cockatoo named Coco, rescued from a closing local pet store. In a matter of seconds, Bobbie Jo falls in love with the bird, only to discover that Coco swears! Already frustrated that so many animals live in the house, Naa Naa is strongly against taking in another; however, despite her objections, the family continues adopting more.

Throughout the season, the Abrams’ welcome a wolf-dog hybrid, a litter of puppies and even the fascinating “Belt the Sloth,” who hangs around exploring his new home… very, very slowly. Viewers will also see the Abrams family throw a huge spring festival on their property for the entire town – with Bobbie Jo determined that all her animals, and children, will be on their best behavior!

OUR WILD LIFE is produced for TLC by Truly Original in association with Crybaby Media.”

What do you think? Do you watch TLC? Will you check out Our Wild Life?

I absolutely love this show and miss it so much! Please bring it back.

We love this show Please bring it back missing my animal cuteness….Love this family…

When are they coming back on TV?

Watched the entire series when it was on. Loved every one. So wish they would have more shows like Our Wild Life.

Please bring wild life back in 2019 love love the show

Please bring show back. Love seeing how much this family takes care of all these babies. And let’s face it getting to see the the babies you would never get to learn about I had never seen a sloth before And the love they are given is overwhelming. Thank you to the whole family most of all there momma

I absolutely love this show I hope it’s on for a long time. Love love it

Please keep the Wild Life. We have loved and laughed till we cried. The whole family is so much fun too watch. Got to love Naa Naa. Please.. .Please… please keep them around

Where is Our Wild Life? Me and my whole family want it to come back on. It’s hilarious and fun to watch. It’s a animal loving show and shows how all animals are important in our lives. Please TLC bring it back.

I really like the show. You can see how much they care for and love every animal. Would love to see mkre seasons