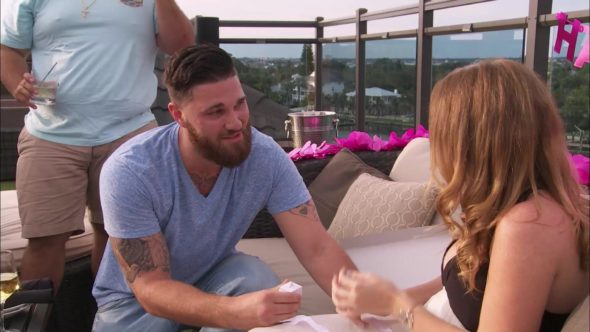 The love stories continue. WE tv just announced Love After Lockup will return for a second season in December.

The docuseries tells “shocking and revealing stories of couples who fall in love despite the prison bars between them.”

Season two of Love After Lockup premieres on WE tv on December 7th at 9 p.m. ET/PT.

NEW YORK – October 19, 2018 – Love grows when and where you least expect it…even in prison. WE tv’s explosive docuseries is back for a second season, exploring new shocking and revealing stories of couples who fall in love despite the prison bars between them. “LOVE AFTER LOCKUP” Season 2 premieres Friday, December 7 at 9PM ET/PT.

From the producers of the hit show 90 Day Fiancé, this season of “LOVE AFTER LOCKUP” will follow six couples, as they share the emotional journey of being united for the first time after years of supervised visits. Last season, two couples were left in limbo as their hopes and dreams were put on hold due to release date complications. This season, their stories continue to unfold along with four new couples who embark on their journey from love behind bars to the marriage at the altar. Season two promises more drama, deception, and surprises!

Clint & Tracie, Hobbs, NM. Clint wasn’t having much luck finding his one true soulmate, until he found Tracie on the website, Meet-An-Inmate.com, who was serving time for fraudulent checks and a parole violation. Immediately infatuated by her, he wooed her into a relationship. The two have never met in person and Clint is eager to marry her as soon as she is released.

Marcelino & Brittany, Las Vegas, NV. After a devastating breakup, Marcelino wrote to Brittany on Meet-An-Inmate.com, which lead to an undeniable connection. After a couple of prison visits he fell deeply in love with the 27-year-old, who has spent almost a decade behind bars for several crimes. Although the two have never spent a day with each other on the outside, they plan to marry as soon as she is released.

Angela & Tony, Grenada, MS. Last season we met Angela, who fell for Tony because he was “hot and young.” Months ago, Angela was left waiting at the bus depot when Tony was not released as expected. This season, Tony finally gets released and is planning on running into Angela’s open arms…but Tony may have some competition; as someone on the outside has eyes for his “old lady.”

Megan & Michael, Fort Worth, TX. Megan is a home health provider in has been saving herself for “THE ONE…” someone who really cares and treats her right. Enter Michael, who has been in the system for most of his life and is currently serving 2 years for a parole violation. After a special proposal during one of their prison visits, Megan is in full wedding planning mode; however, Michael has a secret that may change her vow to marry him.

Scott & Lizzie, Oxnard, CA. Last season, everyone was left with the question…is Scott just another one of Lizzie’s tricks or is this love real? This season, Lizzie is released, and at last the couple have a chance to be alone together. However, that may be short lived, as Lizzie plans on reuniting with her daughter she has only seen once in the last decade. Will this be the family that both Scott and Lizzie need to solidify their relationship?

Caitlin & Matt, Auburn, WA. Despite having only spent about 30 hours together within the confines of a prison visiting room, Caitlin is convinced Matt is her destiny. The two have big plans of getting married, having babies, finding a home and starting a life together. However, they have no idea what it is like to be together on the outside…including being intimate. Will the love between these two grow stronger as they spend time together, or will they realize that the bars in between them made their love and connection more exciting than it really is?

What do you think? Have you seen Love After Lockup? Will you watch season two?