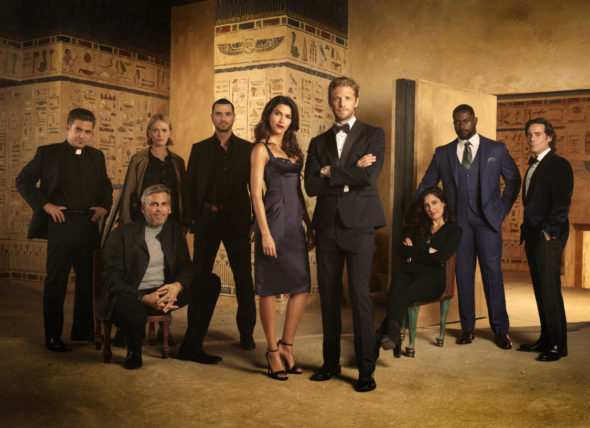 TV show description:
From creators Matt Federman and Stephen Scaia, the Blood & Treasure TV show is a globe-trotting action-adventure series. The drama centers on an antiquities expert and an art thief who join forces to trap a terrorist.

A former FBI agent, Danny McNamara (Barr) has a vast store of knowledge regarding stolen antiquities and works of art. Art thief Lexi Vaziri (Pernas) blames him for the tragedy that took her father. When terrorist Karim Farouk (Fehr) steals an artifact and kidnaps Danny’s mentor, Dr. Ana Castillo (Coppola), Danny seeks Lexi’s assistance to save Ana and bring in Farouk.

Their path is littered with questionable characters who could either help or harm their cause. For instance, arms dealer Aiden Shaw (Shaw) is only interested in that which benefits his sole cause — himself. Likewise, shady Simon Hardwick (Callis) has worked hard to hone his expertise in acquiring artifacts of assailable provenance.

As they travel the world, hot on the tail of their target, Danny and Lexi become embroiled in an ancient conflict concerning the cradle of civilization.

What do you think? Do you like the Blood & Treasure TV series? Should this CBS TV show be cancelled or renewed for another season?

This was a dreadfully written series; Scooby Doo without the animation. The actors were gorgeous and the locations seemed real enough, but even with plausibility suspended, the story line defied credibility and the acting was at the high school level.

I LOVE Blood and Treasure!!

I’ve enjoyed this series so far! Beautiful scenery, interesting characters and plot, with non-stop action and entertainment! It would be a shame to cancel this show…

Blood and Treasure was such an excellent summer time escape. Great actors, interesting intrigue, enjoyable story telling, excitement and action, and everything necessary for enjoyable adventures. Just watched the last episode and I am going to miss it. Loved the son-father twist in it. LOVED it! Hope it returns next summer!!!! Thanks for the journey!

Not Shakespeare, but entertaining and I enjoy the pace of the show.

i like it, but not as much as The Code. The only draw back is that it reminds me of the TV series “The Fugitive”…the search for the one armed man. Each adventure should last a maximum of three weeks. After that, start a new adventure. We all know that Farouk will get away from them each week until the series is over.

It’s really good series… I hope it makes the cut. My wife and I are really enjoying it

Definitely enjoyed. A light soufflé of a show – perfect for summer.